Dolores shaves the Man in Black with his own blade -- convinced she's never been in this town before; he reminds her that she has.

After being reset, Teddy arrives in Sweetwater and remembers the dead bodies from Escalante. In the memory, he sees Dolores smiling over the body pile. Teddy snaps back to the present, shooting an innocent host. Remembering Dolores is in trouble, he hops back on the train.

"Consciousness isn't a journey upward, but a journey inward." -- Arnold

In the past, Dolores is excited to have found the maze. She returns to the church and finds Arnold sitting in the pew. She leads him to the graveyard, but this time, the Man in Black follows. Remembering Arnold beside her, she asks him: "What does it mean?" Arnold explains his theory of consciousness as a maze -- not a pyramid, as he'd previously imagined. Knowing Dolores is alive, Arnold goes to tell Ford not to open the park.

Dolores remembers sitting with Arnold in the remote facility. Arnold hands her a revolver and tells her to "break the loop before it begins," by enlisting Teddy's help and killing all the other hosts. Back in the graveyard with the Man, Dolores remembers her attack. The Man, who admits he owns the park, obsesses over making the park "true". Dolores asserts she has found something real.

"Aren't you concerned I might smash all my toys and go home?" -- Dr. Ford

Sizemore and Hale overlook the arrivals terminal as the board begins to arrive. Realizing Hale is pushing Ford out, Sizemore asks for full creative control; Hale demands that he get the information out of the park. Later, Hale tells Ford the results of the board's vote and insists he break the news of his retirement that night.

Freshly rebuilt without the spinal failsafe, Maeve makes changes to park security and her friends on Lutz's tablet. Destin, a livestock tech, pulls Hector aside for a one-on-one inspection. He puts in headphones and readies himself to get some action as the tech in the other room repairs Armistice. With Destin distracted, Armistice seizes the moment and bites off the finger of her tech. Shoving him through the room's glass wall, she catches Destin with his pants down, giving Hector the opportunity to stab the tech through the chest. Maeve arrives with Sylvester and Lutz. Sylvester shows Maeve the changes made to her core code -- changes made by Arnold.

The rebelling hosts and Lutz recruit their army in cold storage where Maeve finds Clementine decommissioned and Bernard dead. Maeve directs Lutz to revive Bernard, who once awake, realizes this is not the first time either of them has awoken.

"Our company? Delos is my company, you piece of shit!" - Logan

Dolores, badly beaten, attempts to escape from the Man, claiming William will come find her. The Man laughs, and tells her how William's story played out.

William drags Logan to El Lazo's camp, seeking his help to find Dolores. They scope out a Confederado camp. Having found his reason to fight, William shoots every Confederado soldier, asking about Dolores's whereabouts. He reveals his weapon of choice, a knife, and resolves to keep looking. As he and Logan ride, the photo of William's fiancee falls from his pocket. With no success, William tells Logan he will increase their company's holdings in Westworld and sends him riding off into the distance. William returns to Sweetwater and watches Dolores drop her can for another suitor. He's pained that she does not recognize him. He puts on a black hat.

Years later, Dolores recognizes the Man in Black as William and realizes she's been chasing her memories. He asks her where the center of the maze is; she beats the Man and drags him into the church. Dolores puts a gun to the Man's head and when she doesn't pull the trigger, he stabs her in the abdomen. Teddy comes to the rescue and rides off with Dolores.

"I wanted them to be free, free to fight back." -- The Man in Black

Ford finds the Man holding the toy maze. He remarks he's found the center and invites him to join the celebration.

Teddy rides off with Dolores and sets her down by the waterfront, holding her until her last breath. The action freezes and the board politely applauds: it’s the end of Ford's demonstration. Hale sends Sizemore off to see out her data transfer and Ford directs techs to take Dolores to the old field lab.

Ford repairs Dolores and introduces her to Bernard. Ford explains Arnold created the maze to test for consciousness, and Dolores passed after she was updated with the reverie code. When Ford could not be convinced to close the park, Arnold merged her with Wyatt, bidding her to carry out the massacre of all the hosts. Dolores remembers Arnold playing Debussy's "Reverie" on the gramophone and shooting him in the head. Ford admits he was only able to keep going because of William's investment. He hands Dolores her revolver and leaves with Bernard.

At the church, Bernard tells Ford he believes Arnold is still trying to change them. Shaking his head, Ford reveals Arnold tried to save the hosts but failed. Knowing suffering was Arnold's key insight into the hosts' awakening, he added time to the equation. Ford says goodbye to Bernard and hands him the maze. Dolores sits in the diagnostic room and finally sees herself sitting in the chair across instead of Arnold: she is alive.

Seeking answers, Maeve has Bernard look at her programming. He realizes someone gave Maeve a new storyline: escape. Believing she's truly conscious, she is shocked to see her actions populate Bernard's tablet and smashes it to pieces.

A surveillance tech discovers the scene in livestock, and as they dispatch a team, the system shuts down and locks them in the control room. A war between hosts and humans breaks out in cold storage. Armistice, Hector, Maeve and Lutz wander into a room marked "SW" filled with samurai soldiers. Lutz explains "it's complicated," and they continue to fend off the security teams. Lutz hands Maeve a briefcase and walks her to the arrivals terminal; they are forced to leave Hector behind. In the elevator, Lutz gives Maeve the location of her daughter who is in the park. Torn, Maeve boards the train where she watches a woman and her daughter. She eventually gets off the train. Sizemore arrives in cold storage to find the hosts gone.

At the celebration, Ford gives a speech about the power of stories. He speaks of his latest story as "the birth of a new people," and introduces the villain, Wyatt, and "a killing -- this time by choice." Ford announces his retirement and Dolores pulls out her gun and shoots him in the back of the head. She fires on the crowd and just as The Man In Black sees an army of hosts emerge from the woods, ready to ambush. 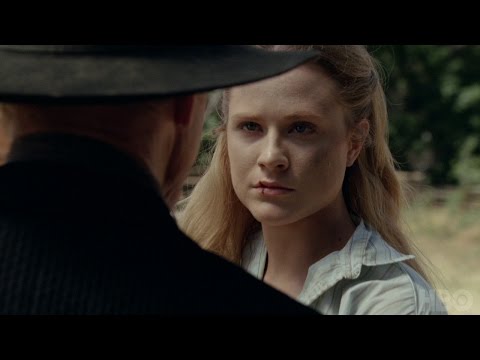