"Imagine being detained for two weeks just because you're a journalist. And a shithead." -- Mike

Dan, at home in his messy apartment, drinks a beer while watching news coverage of the President's historic Middle East peace tour. After successful visits to Jordan and Egypt, Selina's stay in Israel goes so well she extends it by a day. Later that week, news outlets report that Selina has ended her 10-day world tour with a surprise, historic, visit to Iran. There is hope that while there, she'll secure the release of detained reporter Leon West.

Aboard Air Force One, Mike tells Selina that Leon is being detained another hour, so they have to wait to leave in order to get a photo op with him. Selina, bursting with energy following her successful visit, announces that she wants to use that hour to "cure diabetes. Or learn Italian!"

"In my family, basketball is a religion. Also Catholicism. That's actually the main one." -- Richard

Bill Ericsson gives a statement to the press about Selina's delay in the Middle East. As a result, VP Doyle will be picking up part of her schedule, starting with the Rainbow Jersey event, which supports "all sexualities in sports." Selina and Ben watch a live feed of the event, where Doyle struggles through a statement filled with gender-specific references that was originally prepared for Selina.

During Doyle's speech, Kent reveals to Amy that he's been polling Doyle against other potential VP candidates. Amy pushes him out into the hallway to yell at him because Selina promised Doyle she wouldn't poll anyone else -- even though Kent didn't know that. "Yet again," Amy seethes, "the left hand has no idea what the right hand is doing and the freakish middle hand is punching me repeatedly in the tits!"

"Leon? He's the asshole of an asshole's asshole. I feel bad for the guys who had to guard him." -- Mike

Mike receives Leon at the Tehran hotel where he's been detained, and tells him he'll be flying home aboard Air Force One. "I'm shallow enough for that to be exciting," Leon says.

After finally getting a job offer from lobbyist Sidney Purcell, Dan takes a tour of the firm. Purcell wants Dan to take on clients that are best-served by him "shitting on the Meyer agenda." In turn, Purcell promises, he'll make Dan so rich that he could pay Bill Gates to give him a lap dance.

Teddy confronts Jonah about Doyle's terrible speech. "I'm not in the blame game, but that rainbow-colored cluster-f**k in there was entirely your fault." When he goes to grab Jonah's balls, Jonah blurts out that Kent Davison has been polling other candidates for VP. Teddy is pleased that Jonah has thrown someone "into the blender" to save his own ass and outlines a plan: Jonah will leak to the press that Doyle is unhappy and thinking of walking, forcing POTUS to back him. "Give me both barrels," Teddy commands, grabbing Jonah's testicles.

Selina welcomes Leon aboard Air Force One. He's desperate to eat and sleep, but a wired Selina is oblivious to his needs. Instead, she insists on briefing him on her peace talks, revealing that she was delayed a day in Israel. Putting two and two together, Leon concludes that it looks like she purposefully kept him detained the extra day. He threatens to board the press plane and tell them that the U.S. Government deliberately kept him imprisoned in Iran. Ben orders Gary to retrieve Mike from the press plane; Selina tells Ben they need to take off immediately to keep Leon from talking to the press even though that means leaving Gary and Mike behind.

"I've never had strong feelings for a plane, but right now I'd cheat on Wendy with that thing." -- Mike

Inside the Tehran airport, Gary and Mike watch as Air Force One takes off without them and then they scramble to find the "back-up plane." Once onboard, they discover that the back-up plane will be grounded for a week until a replacement part arrives. In order to bribe their way onto the press plane, Mike fills trash bags with liquor miniatures. "In a dry country," he explains, "the man with all the booze holds the cards."

Jonah, in a car with Leon's mother and Richard, receives a call from Ericsson inquiring about trouble in the VP's office. Thinking that Ericsson is referring to Teddy's grabby hands, Jonah fills him in. He's mortified to discover that he's on speakerphone, and not only have Kent and Sue heard the sordid details, but Catherine has also burst into the room to announce that she's engaged. Jonah hangs up in a rage. "We got nothing out of that but a funny story," notes a baffled Ericsson.

"Why in the name of pixelated f**k would you do that?" -- Selina

Ericsson and Kent call Selina to tell her about Kent's secret polling and Doyle's threat to walk. They propose tell Doyle about the data breach that targeted recently bereaved parents, in order to bind him to the administration.

Running through the airport to the press plane, Gary's booze-filled bag breaks, scattering tiny liquor bottles all over the floor. He and Mike scramble to get them back in the bag as armed guards approach them. Aboard Air Force One, Selina wakes an extremely exhausted Ben to tell him that she wants to bring in an old friend from her lawyering days -- Karen Collins -- and appoint her as her new senior advisor. She needs someone "organized and capable" in the wake of all the recent turmoil. Meanwhile, Mike calls Wendy from the Tehran airport. "Turns out you can't buy a boarding pass with tiny bottles of Jack Daniels," he laments. 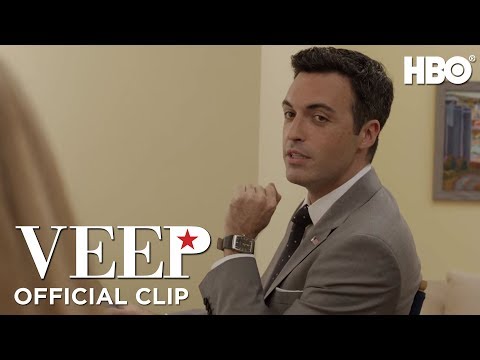