"She's about as welcome here as a turd in a hot tub." - Congressman Furlong

With the Veep's approval ratings in the toilet, Selina and her team jet to a Cleveland to endorse Rep. Furlong's Ohio gubernatorial bid. Already there, Dan, is summoned by Furlong who demands Selina not endorse him. "I get the stamp of approval from her, and I might as well nail a bunch of puppies to the ground, and then start running them over and crush their skulls with my campaign bus," he says.

When Dan politely pushes back, the Vice Chair of the Congressional Oversight Committee threatens to shine the light on the "backseat finger f*cking, insider bullshit" exemplified by the Veep's Clean Jobs task force and her office's role in undermining the President's policy with the Macauley Amendment.

"I know how to give a motherf*ckin' speech. Don't you patronize me with your no-jaw. You Congressman "No-Jaw!" - Selina

Arriving in Cleveland, the Veep spends four seconds greeting the hotel manager, and orders Amy to get everyone in America to like her again. Doing Furlong's bidding, Dan suggests a new strategy for the night's under-attended fundraiser: Do not endorse. Selina doesn't like that idea. Jonah, aware of the Veep's toxic numbers, calls Amy from the President's golf outing and offers her a shoulder to cry on and a booty call.

Later, Rep. Furlong barges into the Veep's suite to make clear if Selina insists on endorsing him, he will publicly reject it. Already vulnerable after being shunned by her daughter and breaking up with Ted, the Veep gets blubbery. Furlong, softened by her tears, suggests she give a speech but without the endorsement. Selina throws him out.

"The 'Crying Game' play. All we got to do is set her up and let the cameras roll. We just got to tweak the tear nipple." - Mike

Inspired by Selina's sobs, Mike and Amy set up a local TV interview and feed the reporter "Chinese daughter torture" questions to provoke the Veep's emotions and, hopefully, boost her ratings. Selina finesses a question about POTUS playing golf with the ambitious Governor Chung's but, as Mike predicted, gets weepy again over her daughter. The Veep rallies by pointing out her woes are nothing compared to the state's rubber workers' struggles. "Ohio is the rubber-ball state, if you think about it, always bouncing back."

"Boy. You'd think with all the money I'm jerking up the wall, I'd get more than a stuffed chicken breast." -Party Donor

At the fundraiser, "Odd-Jobs" Dan spins the teary interview as an example of Selina's passion and conviction to Rep. Furlong. But Furlong isn't having it, and again threatens a committee hearing if "crazy lady" endorses him.

Warm applause greets the Veep and the media response to her interview is great. Whisked away from the non-voting children and paltry $50 donors, Selina ends up talking to a platinum plate donor who divides the world into the "grabbers ... who take the world by the scrotum" and the ones who don't grab. Dan's lawyer friend Larry warns him that if Furlong does conduct a hearing, Dan might experience a corpse-f*cking, "where they take your mortal remains and have as much fun with it as they can because everyone wants to be the guy getting the TV sound-bite." Larry's advice: "Don't call attention to yourself."

"I'm a political leper and an emotional time bomb, so here's an idea, let's put me on stage." - Selina

Now that the Veep's numbers have turned from "toxic to turn-on," Rep. Furlong wants Selina's endorsement. But before Dan can tell her to endorse, the disgusted congressman changes his mind when the Veep chokes up for the third time that day as she begins her speech. After Selina connects with the "Buckeye" crowd, the gubernatorial-hopeful changes his mind again, and at the last moment, the Veep catches Dan's signal to endorse "the dirty little prick."

Back at the office, the team celebrates the positive press response. Selina rewards Dan with a promotion - over Mike. The new director in charge of day-to-day rebuttal immediately issues a press release. But when reports come out that Mike fabricated Selina's sobs, a furious Furlong promises to come after the Veep's office, especially Dan: "You're going to get your back stabbed, your head shot and your nuts danced on"- prompting the Veep to restore Mike's seniority. And now when Selina wants to cry, she can't: "This job has f*cked me up..." 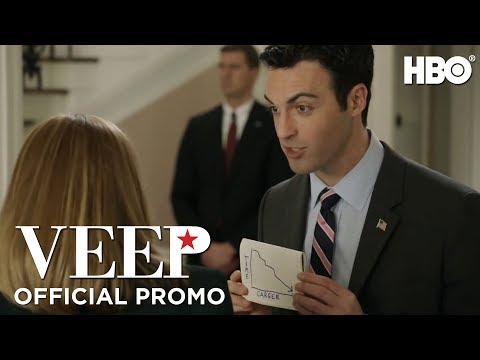