Ben wakes up hung-over and decides to move out of his apartment with Adrian. Jack reveals to Grace that he broke up with Madison. Adrian surprises everyone and returns to school and to Ben's dismay acts like nothing is wrong. A nervous Rachel leaves Tom alone with the children while she goes on a business trip. It turns out Tom isn't as excited about being a parent as he thought he would be. Adrian learns from Katelyn (the guidance counselor) if she continues with summer school she'll graduate in time for college in the fall. Adrian lies to Amy and everyone else at school and pretends that she and Ben are happy. Ricky has an interview at a local college, but the interview goes horribly wrong when the interviewer (Karlee Carmichael) hits on him. The situation gets worse when a scorned Karlee tells Katelyn that Ricky won't be getting into school there because he was the one that tried to pressure her into sex. Reverend Stone lets slip to Kathleen that Grace's new boyfriend, Daniel, is in college. Daniel stops by to meet Kathleen, she actually takes a liking to him and they end up playing a prank on Grace. Grace tries to sneak out of the house to meet Daniel but ends up falling asleep in his car alone while Daniel's inside eating dinner with Kathleen. Adrian begs Ben to be civil and at least hold hands with her at school. Ben decides to move back in with Adrian just as friends and he tells her he'll live in the nursery. Adrian couldn't be happier.

The Secret Life of the American Teenager 4.06 (Preview) 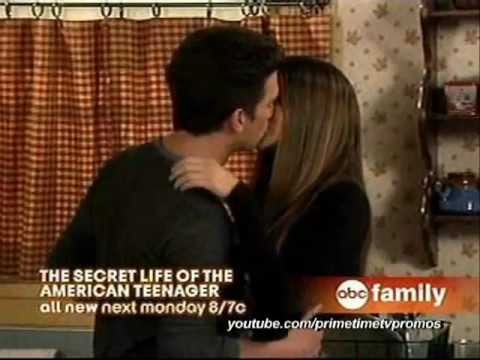