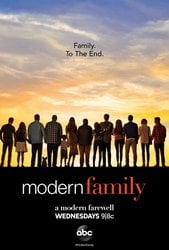 Aloha! All of our favorite Modern Family members have landed on the island of Maui. Let the vacation begin!

Phil has hopes of turning this trip into a second honeymoon for Claire. Actually, it'll be more like a first one. Their wedding was pushed up to a quick city hall ceremony when they realized Haley was on the way. Sadly for Phil, Claire is very honeymoon-resistant. She says, "I'm a mom traveling with my kids. For me, this is not a vacation. It's a business trip." That's not gonna stop Phil from trying to get her to relax.

Phil convinces Claire to join him in the "adults only" pool where they discover the joy of a "no kids" swim. The pool also features a nifty nozzle that Phil enjoys leaning against. When Haley yells from afar that she'd like to hang with some kids she met, Phil convinces his concerned wife to just let her child go. He says, "Turning a family vacation into a honeymoon takes commitment. You can do it. Eye of the Tiger."

Hotel roommates Manny and Luke are the odd couple of the island. Manny prefers things neat and orderly. Luke likes to jump on the bed and pretend he's a bathroom Martian from the nebula of the great toilet. Luke even goes so far as to crinkle and crease Manny's linen dinner jacket. The wrinkles could have been smoothed out if Luke hadn't used the complementary room iron to make grilled cheese.

Jay gets a birthday call from his brother who reminds him that their dad died at Jay's current age. Suddenly, the burger, fries and additional fries Jay ordered for lunch don't seem so appealing. He decides to get in shape fast. Gloria's not thrilled with her new action-packed hubby. She says, "I thought that one of the advantages of marrying an older guy was that I was going to be able to relax. But all the swimming and running and rowing... it's just like how some of my relatives got into this country."

Mitchell and Cameron are off to the Lavender Ranch, where they grow 45 different varieties of lavender. Cool! Cameron believes he may have exaggerated his interest in adventurous travel by implying that he had any. He would much rather hang by the pool with Lily, so he sends his partner off without them.

Mitchell is bummed. He says, "The Lavender Ranch it's... it's something two men are meant to do together." So true.

When Mitchell returns from the land of lavender, Cam convinces him to enjoy the tropical drinks and foot massages being served up poolside. Soon, both men are very relaxed. In fact, they're a little too relaxed as they leave Lily in an elevator as the doors close behind them. Relaxation time is over. CUE THE TWO FRANTIC SCREAMING DADS! Fear not. Gloria finds the accidentally abandoned baby while searching for an MIA Jay.

As it turns out, the birthday boy overextended himself with all his exercising. Jay's back seizes and Phil finds him trapped within the confines of a big hammock. Phil tries to pull his ailing father-in-law out but ends up falling on top of him for about 20 minutes. It seems like a long time, but Jay was incapacitated and Phil is on vacation. Meanwhile, Claire has her hands full with a hungover Haley. She never should have let herself relax.

Jay decides to take it easy for the rest of his vacation, which is just fine with Gloria. Mitchell and Cameron realize that a modest amount of adventure can be relaxing, too. They take a tour of a working banana plantation where they promptly lose Lily, again. Wherever she is, at least they left her in a place where she'll be getting plenty of potassium. They're so considerate.

As for Phil and Claire, they never did get that dream honeymoon. Phil believes it's because they never had a proper wedding. That's why he sets up an outdoor ceremony where they renew their vows in front of the entire family, even Lily. Guess they found her.

It's a wonderful wedding complete with traditional island music. A ukulele man plays a soft, sweet Hawaiian version of Survivor's 1982 hit "Eye of the Tiger" from the Rocky III soundtrack. Mr. T would undoubtedly pity the fool who didn't think this was the perfect ending to an oh-so-eventful family vacation.