A young man videotapes himself in Central Park, watching young, beautiful women and couples in love and lamenting how pretty girls only go for jerks and never notice him.

Meanwhile, Olivia visits baby Noah, who was rushed to the hospital with a high fever and lung issues. She desperately wants to stay with her son, but gets an urgent call from Amaro - a young woman was stabbed 11 times in Central Park. As the ambulance drives off, the same young man stands just feet away, telling the camera that nobody notices him, but by the end of the week, everyone will know the name Holden March.

At the hospital, Benson interviews Gwen Salinger, who says her attacker came out of nowhere and put a knife to her face. He tried to kiss and assault her but didn't know what he was doing. When she pushed him away, he stabbed her 11 times, counting each one out loud and saying, "This is your fault, Gigi!" She says it was strange because she hadn't been called Gigi since high school.

While the team is profiling the assailant, another attempted rape is called in, where the victim was stabbed 15 times, each one counted out loud. Haley Lennon was attacked upon entering her apartment building, and when she resisted, the attacker accused her of not liking him because he wasn't black, saying, "I know what you like, Haley." The victim says she dated a black football player in high school but hasn't since.

To complicate things, Garland Davis, the new Deputy Chief of SVU, starts throwing his weight around the precinct and announces he's setting up a press conference to alert the public. Benson begs him to hold off to let them find the guy before terrifying the city.

Since the only commonality between the victims is that they didn't know their attacker, but he knew them, the team starts calling in victims from unsolved cases to see if any attacks follow the same pattern. One girl, Jean Asher, says her attacker called her by her initials, JL. The last time she was called that was when she worked at a restaurant a few years back where there was another Jean.

Holden is filming himself again. This time, he's angry with his next-door neighbors who are constantly having loud sex. He takes a knife and bangs on their apartment door.

Back at the hospital, Noah is stabilized and improving, but the doctor wants to keep him for testing. Lung X-rays show old rib fractures, likely caused while he was under his addict mother's care as a newborn. Benson is very concerned but with Davis breathing down her neck, she has to get back to work.

Rollins and Amaro talk to Jean's ex-boyfriend, who manages the restaurant she used to work at. He says that a few years ago, he had to fire an OCD bus boy named Holden March, who "accidentally" poured water on a couple engaging in PDA. Rollins and Amaro get his mother and stepfather's address and head there to interview them.

At the home of Adriana March and Thomas Eldridge, Rollins and Amaro learn that Holden was bullied growing up and has major social issues. He feels slighted by society and hasn't been able to stay in school or hold a job, so his parents have been paying for his apartment in the city. Lately, he's been showing improvement and even landed a bike messenger job. Before leaving, Rollins asks Adriana for photos of Holden as a child, which will hopefully help the victims identify him.

Amaro and Benson confront March outside of his apartment. He thinks they're there about his neighbors who are always having loud sex, but when they explain they're there because Jean was attacked, he refuses to cooperate and starts filming himself. A crowd surrounds them as Holden yells that the NYPD is bullying him and keeping him from going to work. He bikes off, but Benson isn't done with him.

Meanwhile, Rollins shows Gwen, Haley and Jean a six-pack of young boys, and both Gwen and Haley recognize Holden. He went to Gwen's summer camp and Haley's brother's high school. Holden asked Haley out when she was 15, but she turned him down. She realizes that must be why Holden stabbed her 15 times. Jean can't identify Holden, but two out of three is enough and the team heads to Holden's apartment...

It's too late. Holden is gone, but he did leave a manifesto, cases for two guns and ammo, and a video message on his computer threatening more women. The manifesto contains dozens of girls' names from his past, all of whom are at risk for his revenge attacks. When the team tries to interview Holden's loud neighbors, they find the couple dead in their apartment.

Davis is up in arms - he is livid with Benson and Amaro for not arresting Holden the day before. They explain they didn't have probable cause, but Davis is out for blood. Olivia keeps getting urgent calls from the hospital but Davis won't let her take them. Finally she speaks with Chantal Jackson, Noah's social worker, who is furious with Olivia for going to work instead of being with her sick child. She is putting Benson's absence down in her report.

Back at the station, Holden's parents scan his hit list for familiar names. Adriana points out Holden's high school English teacher, a beautiful blonde woman named Mrs. Syncovich. Amaro and Rollins interview her and find that she remembers Holden as being an odd kid, though a talented writer, who likely had a crush on her. The detectives are concerned Holden would attack her husband, who teaches nearby. They race over to find him, but are too late: He's been shot in the head in his classroom and his students are missing.

Amaro and Rollins search the school and find Holden armed and holding four girls hostage in a classroom. He will only speak to Rollins, because she's a pretty blonde, and forces her to cuff Amaro. Rollins appeals to Holden's feelings of invisibility, telling him how great a guy he is and how lucky any woman would be to have him. She convinces him to let Amaro and the hostages go and is left alone in the room with the serial killer.

Outside, Davis and his team are set up, ready to take Holden out, despite Benson's protests. Holden's mother is hysterical, begging the police not to shoot her baby.

Inside the classroom, Rollins charms Holden, telling him she read his manifesto and while girls may not appreciate him, a woman like her does. He deserves to be loved and to be kissed. He lowers his gun and leans in for his first kiss...

BAM! Davis' sniper connects with Holden's head, and blood spatters all over a horrified Rollins. Holden's mother screams in agony - Benson promised they wouldn't hurt him, but it was out of her hands.

After seeing Holden's mother's pain, Olivia goes back to the hospital and holds Noah in her arms, grateful that he is happy, healthy and alive, unlike Holden. 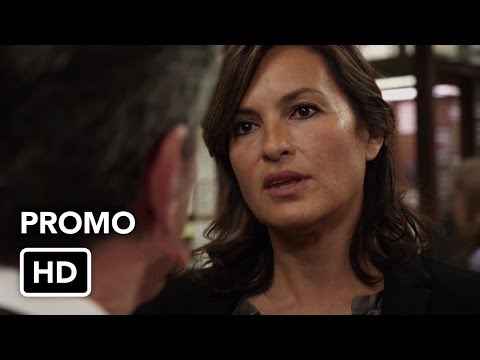