Craig Rasmussen is a worn and weathered man. After polishing off a few drinks at a local bar, he heads across town to his wife's house. Craig's mother-in-law answers the door and begins lecturing him. Without speaking a word, Craig pulls a pistol from his jacket and shoots her three times. Craig then heads to his wife's work where he shoots her and two of her co-workers. Craig has clearly snapped.

In the midst of his killing spree, Craig heads to a sketchy part of town to pay a visit to Jeannie, an aging prostitute with whom he clearly has a history. Jeannie has no idea that Craig has snapped, and she gladly gets into the car with him, as she's done hundreds of times before. The two of them drive away with a trunk full of high-caliber guns and ammunition. Craig isn't finished yet.

In the SVU bullpen, Cragen gives the squad a rundown on Craig's killing spree. He's a former bus driver who was laid off nine months ago, and the NYPD and FBI are pulling out all the stops to catch Craig before he kills again. The FBI knows that Craig has a long-running relationship with Jeannie, a prostitute. They believe that she may be the key to finding Craig. They need to find Jeannie.

The SVU squad heads to Jeannie's stomping ground, a dark, seedy stretch of road crowded with prostitutes and drug dealers. After questioning a few pimps and prostitutes, Benson and Amaro learn that Jeannie got in a car with Craig hours earlier. Jeannie arrives in a minivan seconds later, but the driver is not Craig. Jeannie tells the detectives that she accompanied Craig to a motel, but she left without him.

The detectives head to the motel, but Craig is already gone. Unfortunately, he massacred three people in an adjacent motel room before he left. Craig is in a new vehicle now, and the motel manager didn't hear anything; the detectives have no idea where he might be. When Benson tells Jeannie what Craig did, she agrees to help the detectives track him down.

Craig calls Jeannie to arrange for a meet up. The detectives tap Jeannie's phone and give her a wire to wear as she arranges to meet with Craig again. The FBI traces Craig's phone call to an auto shop, but by the time they arrive, Craig is already gone, having left another victim behind.

Before meeting with Craig, Jeannie goes to meet with her mother. Her daughter shows up as well, but it's clear that neither of them want anything to do with Jeannie. Jeannie is still wearing a wire, and Benson here's the whole conversation. She can't help but feel sorry for Jeannie.

Later, the FBI tracks down Craig's stolen car. He's long gone, but they find the body of a cab driver nearby. Craig is driving a taxi now. Meanwhile, Amaro follows Jeannie while she stops into the church for confession. Jeannie tells her priest about the problems she's having with her family and how her mother and children don't want anything to do with her. Again, Benson hears everything.

While they're waiting for Craig to call, Benson and Jeannie have some time to catch up. During their friendly conversation, Jeannie tells Benson about her son, who is currently serving in the military. Amaro informs Benson that the FBI found the stolen taxi, and they have video of Craig stealing a town car. He's headed to Jeannie's corner to look for her, and the detectives will be ready for him.

As Jeannie works her corner, she gets a call from Craig. He's on his way. Moments later, a car pulls up. Craig points a gun at Jeannie and orders her into the car. The FBI and NYPD immediately swarm the vehicle. In the car, Craig tries to explain his actions to Jeannie. He's clearly lost his mind, and before he can finish with his explanation, a sniper shoots Craig in the head, splashing blood across Jeannie's face.

Later, Benson visits Jeannie at the hospital. Jeannie is okay, albeit a bit shaken up. Benson tries to convince Jeannie to go to rehab and stop working the streets, saying that she'll help Jeannie every step of the way, but Jeannie's not interested. Nonetheless, Benson won't give up. Back in the squad room, the other detectives gather to go over options for Jeannie, and they come up with a sneaky plan.

Benson and Amaro stop by Jeannie's apartment to place her under arrest for prostitution. They bring her to the station and offer to drop the charges if she goes to a rehab facility. At first Jeannie is uncooperative, but then Benson brings in Jeannie's mom, daughter and son for an intervention. Jeannie's family pleads with her to get help. Eventually, she breaks down and agrees. 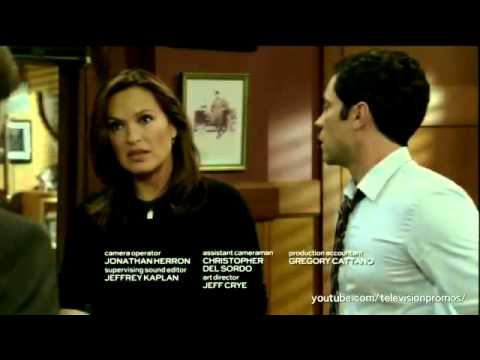