Rollins and Fin find Eric, a mentally imbalanced man, in Central Park convulsing on the ground naked. He's seeing visions and talking to an imaginary girlfriend. The officers rush him to the La Guardia Psychiatric Ward unsure if the man was having a drug-induced hallucination or if he's just psychotic. At the psychiatric ward, Eric sees a patient named Gia being raped.

Eric tells Fin and Rollins about the rape. Naturally, they're both a little suspicious; after all, Eric isn't a model of mental health. Eric describes Gia's bracelet and a deep wound on her arm. Could he be describing a real patient? The SVU team goes to the psych ward to investigate. Benson discovers that Gia matches Eric's description perfectly. Benson and Rollins question Gia. They find out Gia was very upset the night before and had to be sedated. Gia denies being raped but allows Benson and Rollins to give her a rape kit.

Amaro says Gia may have been raped; the rape kit showed signs of semen and male DNA. Gia has a history of suicide attempts - was chronic rape the reason? Rollins and Benson question Diane, Gia's mother, for more information on Gia's past. Diane says that Gia has a history of accusing innocent men of rape. Gia's mentally ill like her father; that's just the way she is. On the way out, Benson and Rollins meet Bella, Gia's concerned aunt, and Gia's Uncle George. They claim to be worried about Gia's well-being.

Amaro finds that days before Gia's alleged rape, she got in a fight with another patient named Jay. Rollins and Amaro question Jay about the incident. Jay loses his cool almost immediately, flying into a violent rage before collapsing into sobs. Under further questioning, Jay says he was protecting Gia from Charles Lee, a guard who forces patients to have sex with him. Amaro questions Charles. Charles says Gia asked him for a gun only a couple nights before. He says Gia performed oral sex on him, but it was totally consensual.

Benson and Rollins question Gia. Gia admits she performed oral sex on Charles, but it was so he would give her a gun. Then he reneged on the deal. Benson asks Gia why she wanted a gun. Gia claims she needed protection. Then she says it was her Uncle George who visited and raped her. She says he's been raping her since she was 14. Rollins admits that she too was assaulted at her previous job. Later, Rollins and Benson arrest George after seeing that he impersonated a doctor to gain entry into La Guardia the night of the rape.

The SVU team questions George. He admits to falling in love with his niece Gia. He claims it's true love and that it's acceptable since they're not related by blood. He waited until she was of legal age before they had sex for the first time. George impersonated a doctor because he didn't want his wife to find out he was seeing Gia. George even shows the investigators a love letter from Gia; he says it's proof he isn't attacking Gia. 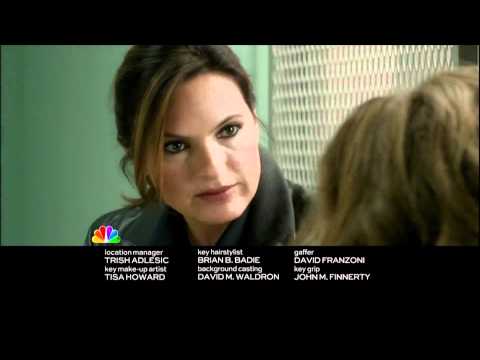