A ballerina named Danielle prepares for her Broadway debut while outside a man snaps photos of her. Later that night, on a dark street, the man rapes Danielle. He has a tai chi yin-yang tattoo and tells her to look at his face. Then he says, "Tell me you love me, Mommy." When Danielle recounts the horrific details to Benson the next day, Rollins overhears the story. Rollins thinks this rapist is the Atlantic Coast Rapist, a rapist she tracked back in Georgia. Benson tells Rollins it's probably just a coincidence.

Benson and the gang post pictures (made by their best sketch artist) of the rapist all over the city. Eventually, another victim named Leila comes forward. Her story is identical to Danielle's. She even describes his tattoo in detail. Later, Fin gets a tip that the serial rapist frequented a nearby park with his son. They track him down to an apartment. His name is Gabriel Thomas and he has a son named Luke, a wife named Janey - and the same tattoo the victims described.

Rollins jumps at the chance to interrogate Gabriel, but Cragen has another idea in mind. Rather than let Rollins take the lead, he chooses Benson and Amaro for the job since they're more impartial. Benson and Amaro quickly realize Gabriel is a pharmaceutical rep with no alibi. What's worse - he used to live in Georgia. Later, Benson learns Gabriel's a DNA match with the rapist who terrorized victims in Georgia years before. Amaro tries to get Gabriel to confess, but it doesn't work. Later, when he's remanded to Rikers, he attempts suicide. He whispers to Amaro, "Tell my son I didn't do this."

In his hospital room, Gabriel tells his wife he can't believe she thinks he's guilty. She's disgusted and tells Benson and Amaro she'd cut him loose if he had any other family. His parents died when he was in college. Then Janey recalls a Halloween she spent with her husband in 2003. He consoled her after a miscarriage. Amaro has a realization: there's no way Gabriel could have been with his wife and committing a rape across town at the same time. But then why was his DNA all over his victims?

Benson and Amaro learn that Gabriel was adopted. Benson and Amaro talk to Gabriel's birth mother who says she gave up twin boys for adoption. She only ever heard from one of them, Brian. His adoptive mother killed his father right in front of him. His mother later got the death penalty. Benson and the gang discover that Brian Smith - Gabriel's twin brother - also recently moved to New York! Brian has been committing crimes and pinning them on his brother. Rollins decides to set a trap. The first step: making the public - and Brian - think Gabriel is going free.

Rollins jogs past Brian, a member of the NY Parks Department. He quickly takes the bait, snapping photos of her. As she jogs past a remote part of the park, Brian attacks Rollins. Amaro jumps in just in time. Amaro beats Brian mercilessly, worrying Rollins. Later, Brian claims Rollins came on to him. He says he'll only tell the truth to "the blond." Intent on getting a confession, Rollins interrogates Brian. He blames Gabriel for all the other rapes. Rollins points to Brian's chipped tooth and scarred abdomen and says many of the victims described them in detail. Brian's guilty.

Rollins interrogates Brian. She recounts his terrible past: one mother who gave him up and another who killed his father. He's so damaged that he took his rage out on innocent victims - and pinned the blame on his brother. Later, Benson and Amaro set Gabriel free. He stands in shock when he sees his twin; Gabriel never knew he had an identical twin. 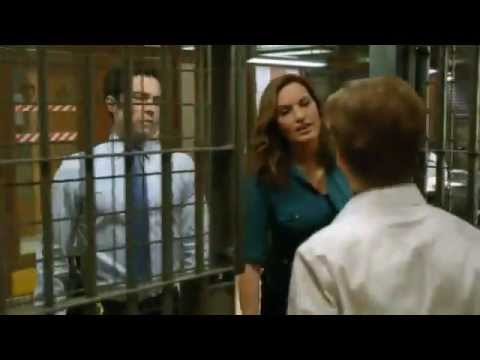