The 'Unholy' songstress receives backlash for extending her partnership with the alleged rapist of the 'TiK ToK' hitmaker but says she has 'nothing to say.'

AceShowbiz - Kim Petras is opening up about her continued partnership with Dr. Luke, the alleged rapist of Kesha (Ke$ha). In her since-deleted social media post, the "Unholy" singer defended her decision to work together with Dr. Luke.

On Sunday, November 27, Kim was called out by numerous Twitter users for her collaboration with the embattled music producer. It all started when the "Coconuts" hitmaker tweeted "get talented or good at anything then talk to me," which appeared to be a shade at her haters.

One user immediately called her out, replying that she should stop defending Dr. Luke, whose real name is Lukasz Sebastian Gottwald, first as he has a lot of controversies in the music industry. Kim then doubled down on her previous statements about the controversial record producer, writing, "500000 ppl work with him why y'all only coming at me. I have nothing to say or be ashamed of at all. go away." 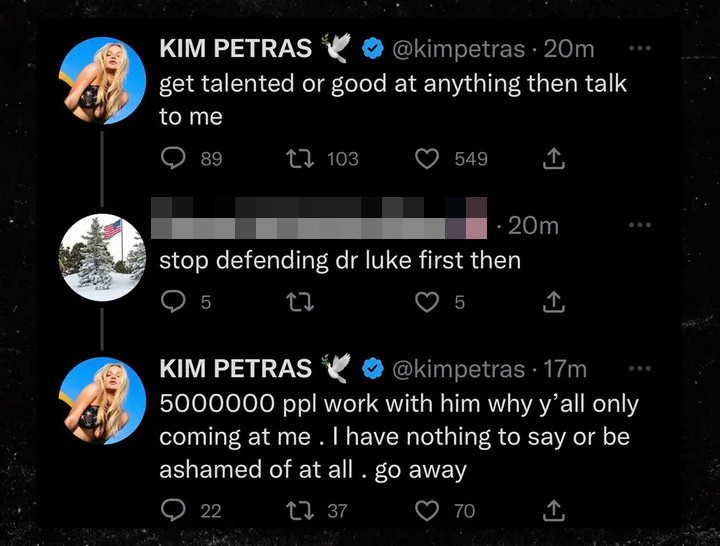 Kim has since deleted her response but many online users were able to screenshot the tweet and repost it on the social media platform. After the post went viral, many users called out the pop star and other musicians working with the producer, with one fan writing, "Pls stop supporting her and other artists working with luke." Another tweeted, "career hasn't even started and already needs to be cancelled."

Dr. Luke's controversy started when Kesha dragged his name in a lawsuit filed in 2014. In it, the "TiK ToK" hitmaker accused Dr. Luke, who has also worked with acts like Katy Perry and Britney Spears, of emotional and physical abuse and claimed he drugged and raped her.

Dr. Luke went on to countersue Kesha, claiming she had breached her recording contract and concocted rape allegations in a bid to nullify the deal. Back in 2020, it was determined that Kesha defamed Dr. Luke by publishing a false statement when she texted Lady GaGa and suggested he had raped Katy. In her testimony, Katy declared that the rape incident never happened.

The judge, however, later had a change of heart. In July 2021, the judge ruled that the music producer will have to prove by clear and convincing evidence actual malice on Kesha's part when and if the warring parties take their spat to court. Kesha will also be allowed to seek compensatory and punitive damages, plus attorneys' fees and costs, for the lengthy legal battle.