The actor who played the infamous Michael Myers in the original John Carpenter-directed slasher horror movie passed away over the weekend following health struggle.

AceShowbiz - Actor James Winburn, who portrayed Michael Myers in the original 1978 "Halloween" film, has passed away aged 85. James, also a famed Hollywood stuntman, allegedy died over the weekend from an undisclosed health issue, but his passing only emerged on Monday, November 21.

"We are extremely sad to learn of the passing of James Winburn, who joined us for @ftlohorror last month," Monopoly Events, which last month featured James in its "For the Love of Horror" fan convention, paid tribute to him. "James was an absolute pleasure to work and shared some amazing stories with everyone over the weekend. Our sincere condolences go out to his family, friends and fans. #RIP." 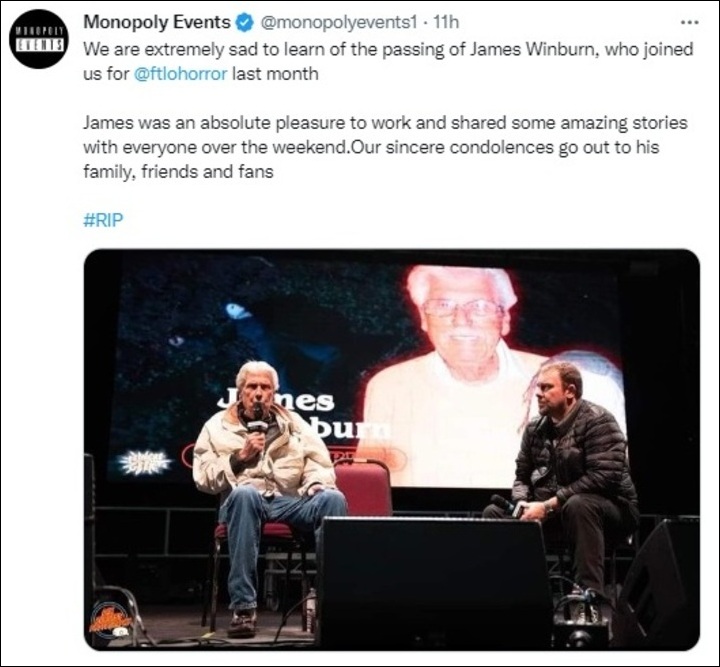 Monster-Mania Con, which also runs horror conventions, paid a similar tribute after the actor reportedly missed its 2022 event due to ill health. The firm said on Facebook, "Sad to learn of the passing of James Winburn today."

"James was an absolute pleasure to work with and we had hoped to see him again for our show in Oaks, PA but sadly a health issue prevented that. James was always appreciative of the Halloween fans and truly enjoyed meeting everyone. Our sincere condolences go out to his family, friends and fans."

James combined his acting and stunt skills in several scenes in John Carpenter's "Halloween" film, including the finale when he tumbled from a window after being shot before vanishing - starting one of the world's biggest and longest-running horror film franchises.

James returned as psychotic Michael Myers in 1981 sequel "Halloween II" and was credited for stunts in acclaimed films including "Escape From New York", "Tron", and "Colors".