Ticketmaster and Live Nation Entertainment Inc. are being investigated by Tennessee Attorney General Jonathan Skrmetti on the heels of the disastrous presale event.

AceShowbiz - Tennessee Attorney General Jonathan Skrmetti is investigating consumer complaints about chaos during the presale of tickets to Taylor Swift's concert tour. According to Jonathan, his office will be looking into Ticketmaster and Live Nation in the wake of the disastrous presale event for the pop star's upcoming "Eras Tour".

Jonathan said in a press conference on Wednesday, November 16 that antitrust violations "could be an issue" regarding Ticketmaster and Live Nation Entertainment Inc. The two control more than 70 percent of the primary ticketing and live event venues market, according to consumer groups.

Jonathan added that he's concerned a lack of competition has led to a poor experience and higher prices for consumers. So far, Ticketmaster and Live Nation have not been accused of misconduct.

"There are no allegations at this time about any misconduct, but as the Attorney General, it's my job to ensure that the consumer protection laws and antitrust laws in Tennessee are being honored," Jonathan stated. He said "a number of complaints" were made to his office regarding the presale process, leading to a desire to better understand what exactly went wrong.

Those who registered on the Ticketmaster website were given a chance to receive a presale code. However, when the codes were sent out, customers were forced to deal with long wait times or a site that wouldn't load.

Ticketmaster released a statement claiming the issue was due to "historically unprecedented demand." However, Jonathan took issue with that defense. "As an industry player, you would think Ticketmaster would be prepared," he insisted. "Because they have a dominant position, they may have thought they didn't need to worry about that. This could be an indicator that there's not enough competition in the market." 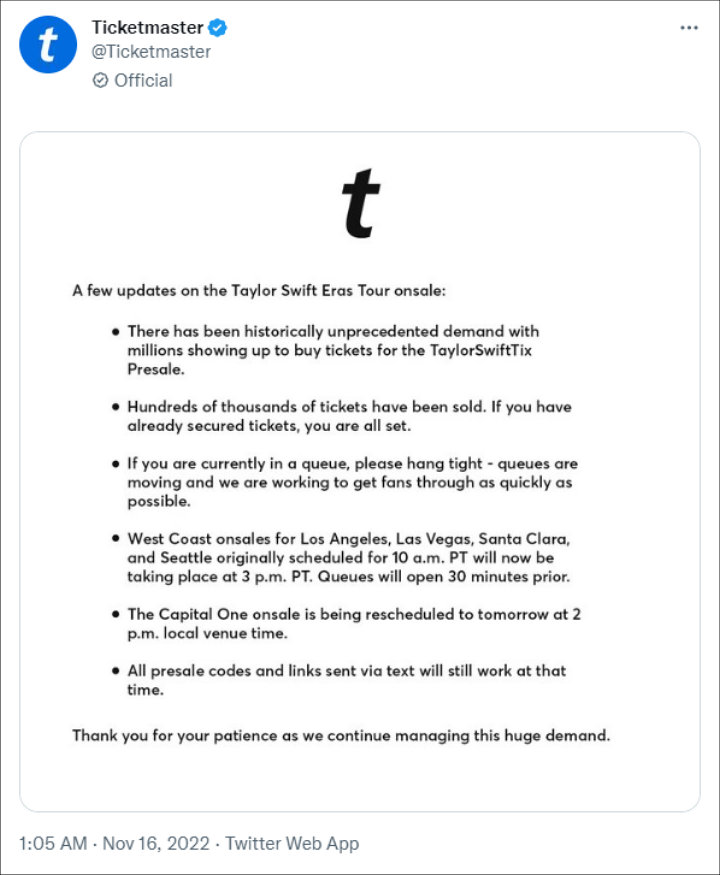 "We're looking at a company with an extremely dominant market share. I've heard it may be up to 70 percent of the concert venue ticket sales," Jonathan explained. "Any time you have that kind of concentration of market share, there's the risk that the lack of competition will not just drive up prices for consumers; it will also reduce the quality of the product."

He continued, "Potentially, this is a situation where the quality of the product is reduced, where the infrastructure provided for ticket sales doesn't rise to the level that the consumers deserve, because we're not talking about a company that needs to compete as much to get the consumers' dollars."

According to Rolling Stone, "As of 11 A.M.. on Tuesday, the site [Ticketmaster] was experiencing major issues, with fans either completely logged out or in a queue 2,000-plus people strong that appeared frozen." House Rep. Alexandra Ocasio-Cortez even weighed in on the fiasco, tweeting, "Daily reminder that Ticketmaster is a monopoly, it's [sic] merger with LiveNation should never have been approved, and they need to be reigned in. Break them up."

Seemingly weighing in on the issue, Taylor herself said that she's losing her "damn mind." However, instead of venting further about her frustration, she celebrated her 2023 Grammy nominations, which were announced on Tuesday, November 15. "but...," the "Anti-Hero" hitmaker added, "All Too Well 10 is the song I'm the most proud of, out of anything I've written. The fact that it's nominated for Song of the Year at the Grammys, an award I've never won, that honors the songwriting... it's momentous and surreal."