The Backstreet Boys singer and his sister Angel support a charity to raise awareness of children's mental health in the wake of their brother Aaron Carter's tragic passing.

AceShowbiz - Nick Carter has announced a new mental health initiative for children in memory of his late brother Aaron. The Backstreet Boys star's younger brother - who suffered from schizophrenia and bipolar disorder and publicly battled with his mental health - was tragically discovered dead in his bathtub, aged 34, on November 5, in an apparent drowning although his cause of death is not known at this time.

In the wake of Aaron's passing, Nick, 42, and his sister Angel, 34, who were somewhat estranged from the late star, are raising funds for the organisation On Our Sleeves, which aims to end stigmas around children's mental health. "Very grateful for the outpour(ing) of love and support for my brother," Nick announced on his Instagram Story.

"In his memory, a donation fund has been started to benefit @onoursleevesofficial, an important children's mental health helping families across America. Thank you for choosing to celebrate the impact of the life of Aaron Carter with a gift of hope. By honouring Aaron, you help Nick, Angel, and their family's commitment to helping others (sic)." 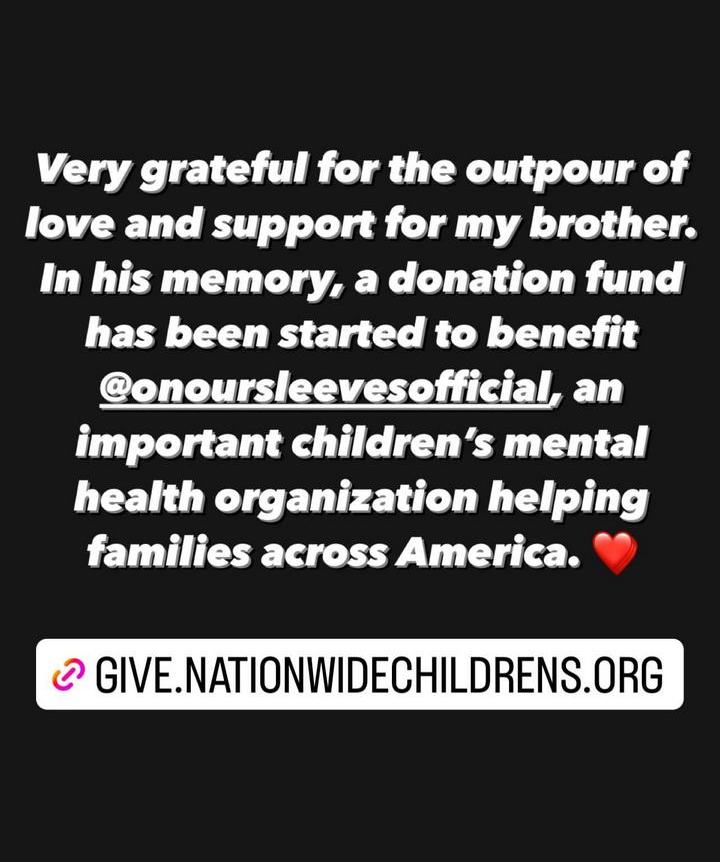 Nick paid a moving tribute to Aaron - who he affectionately nicknamed Chizz - the day after his death. He wrote on Instagram alongside a series of throwback and childhood images of him and his sibling, "My heart has been broken today. Even though my brother and I have had a complicated relationship, my love for him has never ever faded."

"I have always held onto the hope, that he would somehow, someday want to walk a healthy path and eventually find the help that he so desperately needed. Sometimes we want to blame someone or something for a loss. But the truth is that addiction and mental illness is the real villain here."

"I will miss my brother more than anyone will ever know. I love you Chizz. Now you get a chance to finally have some peace you could never find here on earth. God, please take care of my baby brother."

Along with Nick, Aaron is survived by six other brothers and sisters as well as Melanie Martin, 30, his fiancee and mum of his 11-month-old boy Prince.

He lost custody of his son and was checked into rehab in an effort to bring his son back home.

Aaron - who battled addiction for a decade - said a few months ago on social media he had not relapsed but was checking in for treatment to cope with his "triggers." He said, "I haven't had any relapses or anything like that, it's just triggers are big right now for me (and) I want my son back."