The 'Jennifer's Body' actress hits back at a social media troll who accuses her of not keeping up with her grooming routine as her pelvic tattoo pops out of her Princess Zelda costume.

AceShowbiz - Megan Fox is setting the record straight. Taking to her social media platform, the "Jennifer's Body" actress has slammed a rude troll who mistook a tattoo on her pelvic for unshaved bikini line.

On Friday, November 11, the 36-year-old actress turned to her Instagram account to share some photos of herself and her fiance Machine Gun Kelly in video game "The Legend of Zelda" costumes. The "Transformers" actress dressed up as Princess Zelda while her soon-to-be husband opted for warrior elf Link.

Megan's costume included dual sky-high slits that highlighted her long toned legs, but one appeared to reveal a faint shade just past the edge of the fabric. Some comments directed at the photos focused on the exposed skin on her hip. "All that money and she can't but a razor," wrote one troll in a comment, "She's now off my 'list.' "

Upon learning of the rude and incorrect claims, Megan quickly shut it down, explaining that what the troll took to be her unshaved bikini line was actually a tattoo. The dramatic cursive tattoo is her ex-husband Brian Austin Green's first name.

"Are you mistakenly referring to my tattoo?" she wrote back, offering a sarcastic comment of her own. "Either way I'm devastated to be off your list," she quipped, "Was hoping you'd wife me." 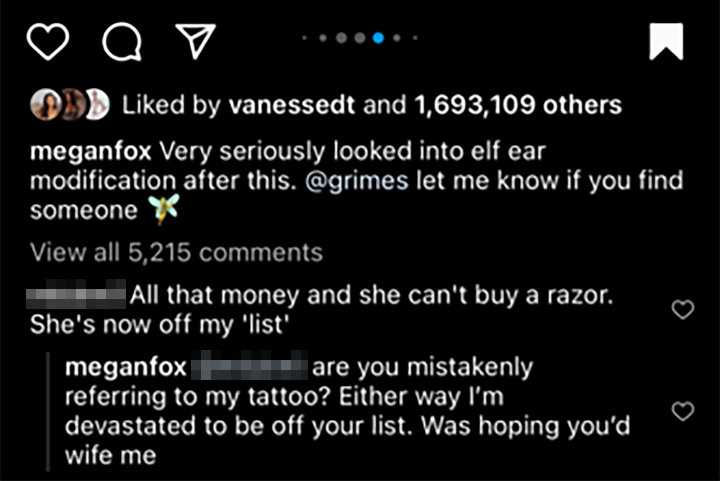 Megan Fox clapped back at troll who mistook her pelvic tattoo for unshaved bikini line.

Prior to this, Megan, along with her fiance MGK, also became the subject of troll over their racy Christian Halloween outfits. At the time, MGK dressed as a priest in black and red robes. He's seen holding a leash around Megan's neck, with the actress also wearing black lingerie and fishnets.

In one of the snapshots, MGK was snapped feeding Megan what appeared to be Sacramental bread. "On Sundays we take communion," the actress captioned a set of pictures of the couple in their costumes.

"What the hell is wrong with you people," one angry critic commented. "Unacceptable," another added, "No one should ever mock someone else's religion." A third wrote simply, "The humiliating and degrading things people do for social media."