Making use of her Twitter account, the former 'Keeping Up with the Kardashians' star makes it clear that wearing the pair of shoes doesn't mean that she's supporting the Yeezy designer in any way.

AceShowbiz - Caitlyn Jenner tried to clear up any misunderstanding after she was seen wearing Kanye West's Yeezy sneakers. Making use of her Twitter account, the former "Keeping Up with the Kardashians" star made it clear that wearing the pair of shoes didn't mean that she's supporting the Yeezy designer in any way.

In response to Daily Mail's tweet which suggested that she might be "standing with Ye," the former athlete wrote on Friday, October 28, "Anti-semitism has NO PLACE in our society at all." The ex-spouse of Kris Jenner went on to say, "Yes I wore The shoes, but keep in mind @adidas is still selling them...." 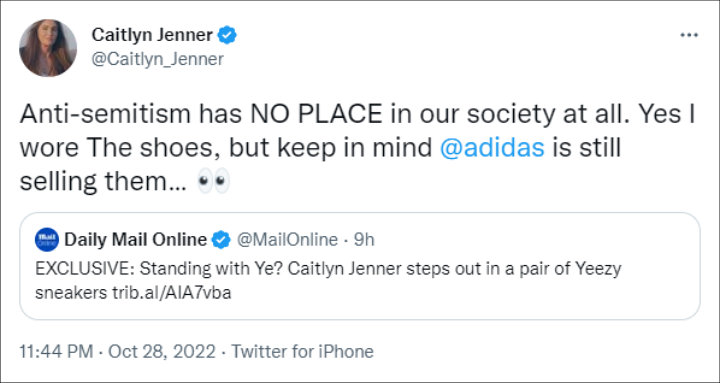 Caitlyn's tweet arrived after she was photographed slipping on a pair of beige Adidas Yeezy Boost 350 sneakers for a coffee run in Malibu on Wednesday. During the outing, the reality TV star was casually dressed in a gray workout top and cropped jeans shorts. She completed her look with designer sunglasses while carrying a black handbag.

In the wake of his anti-Semitic and "White Lives Matter" controversy, brands, including Adidas, decided to cut ties with the "Donda" artist. On Tuesday, the footwear brand, which launched Ye's first pair of Air Yeezy sneakers in 2013, shared in a statement, "Adidas does not tolerate antisemitism and any other sort of hate speech. Ye's recent comments and actions have been unacceptable, hateful, and dangerous, and they violate the company's values of diversity and inclusion, mutual respect, and fairness."

It continued, "After a thorough review, the company has taken the decision to terminate the partnership with Ye immediately, end production of Yeezy branded products and stop all payments to Ye and his companies. adidas will stop the adidas Yeezy business with immediate effect."

It was also revealed that the brand would continue selling the rapper's existing Yeezy product designs using its own branding. "Looking ahead, on our understanding, the company will not sell any Yeezy-branded products and all Yeezy products will be branded under the Adidas brand," analyst Edouard Aubin said in a statement to clients. Internet users were not happy upon learning of the news. Someone even accused Adidas of racism with the person writing, "Says a lot….. smh I really hate racism in all disguises."

As for Ye, he revealed that he lost $2 billion in one day in the wake of his anti-Semitic scandal. "Ari Emanuel. I lost 2 billion dollars in one day. And I'm still alive. This is love speech. I still love you. God still loves you. The money is not who I am. The people is who I am," so he wrote in an Instagram post. His post arrived after it was reported that the talent agent urged brands to drop the hip-hop star.