The Hot Girl Meg tells her fans and followers that she needs to 'take a break' after following her appearance in the October 15 episode of 'Saturday Night Live'.

AceShowbiz - Megan Thee Stallion is telling the world that she needs a little break. The Houston Hottie has announced on her social media platform that she will be taking a hiatus shortly after her Los Angeles home was robbed.

On Friday, October 14, the 27-year-old Grammy-winning raptress turned to her Twitter account to share the news. "Hotties im really sorry but after ['Saturday Night Live'] I really gotta take a break." She later reasoned, "I'm so tired, physically and emotionally."

The tweet came just minutes after she reacted to the home robbery. "Wow," the "Hot Girl Summer" hitmaker first posted. In a following tweet, the femcee shared, "Material things can be replaced but I'm glad everyone is safe [blue heart emoji and praying hands emoji]." 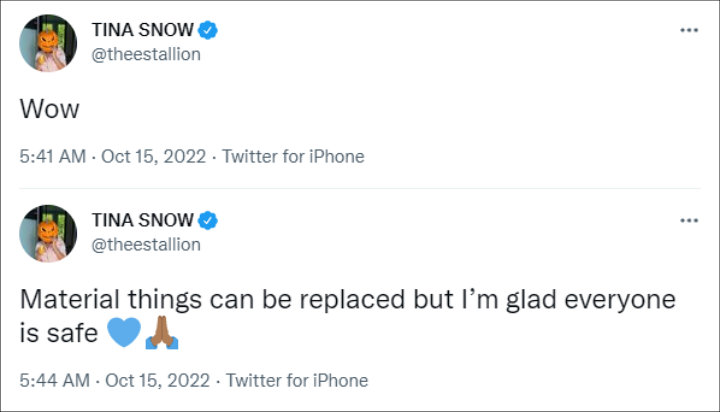 Meg's home has reportedly been ransacked by two thieves who took up to $400,000 in jewelry, cash and electronics. According to law enforcement sources, the "Body" spitter's house had been targeted on Thursday night, October 13.

It's reported that the men gained access to Meg's mansion after breaking a back door window. The pair, who allegedly were wearing hoodies and gloves, headed straight for her "primary bedroom" and took between $300 to $400K worth of jewelry. Meg was reportedly not home at the time.

Local police are still trying to find the burglars and are looking at the surveillance footage from Megan's home, as well as a video from her neighbors' cameras that may have captured the intruders. No suspect has been arrested.

Megan will pull double duty, as host and musical guest, in the Saturday, October 15 episode of "Saturday Night Live". Expressing her excitement, the "Sweetest Pie" raptress turned to her Instagram page to alert her fans. "Hosting andddd performingggg REAL HOT GIRL S**T @nbcsnl tune in ALL HOTTIES," so she wrote.

In a promotion released on Wednesday, October 12 for her scheduled "SNL" show, Megan was seen confronting cast member Sarah Sherman. In the teaser, Sarah pops her head in to check on the "WAP" rapper, who's practicing her lines. "Oh my god! Sarah girl, hey! I am so excited," the 27-year-old spitter says. "I'm a little nervous, but I feel like we're gonna have fun."

Sarah, who's only shown close up in the first few shots, responds, "That's the spirit, you're the best. You're literally gonna be amazing." Then Megan pauses and tells Sarah, "Sarah, b***h, do you know you are completely naked?"

The video then zooms out and shows a naked Sarah realizing she's been in the nude this whole time. "Yeah, like totally naked," Megan says. "So, like all day, you didn't know you was completely butt-a** naked?"

"No! And I literally saw all of my coworkers. I took two trains here with a transfer. I bought a candy bar from a kid on a train," Sarah responds as Meg makes a silly disgusted face. "And nobody, not one person, said a single thing? Ugh!"

Then Megan makes a reference to one of her most iconic songs. The rap star says, "Well, let me be the first to tell you. Your whole 'WAP' is out," to which Sarah responds, "More like a DAP. Dry as a bone."