The 'deja vu' singer takes to her Instagram Story to express her gratitude after becoming the first female artist to have three solo songs on a single album amass a billion streams on Spotify.

AceShowbiz - Olivia Rodrigo partly owes her fans for her success and she never forgets that. The three-time Grammy Award-winning artist has thanked Livies after she recently hit another milestone in her music career.

The 19-year-old pop megastar has been named the first female artist to have three solo songs on a single album amass a billion streams on Spotify. Celebrating the good news, she has taken to her Instagram Story to express her gratitude.

On Thursday, September 29, two days after she broke the record, she re-posted Spotify's Story about her latest achievement. "Olivia Rodrigo's 'deja vu' is the newest member of the Billions Club. Thanks to all the fans," the original post read. The singer/actress added over it, "omg thank u," along with a face with tears of joy emoji and a red heart emoji. 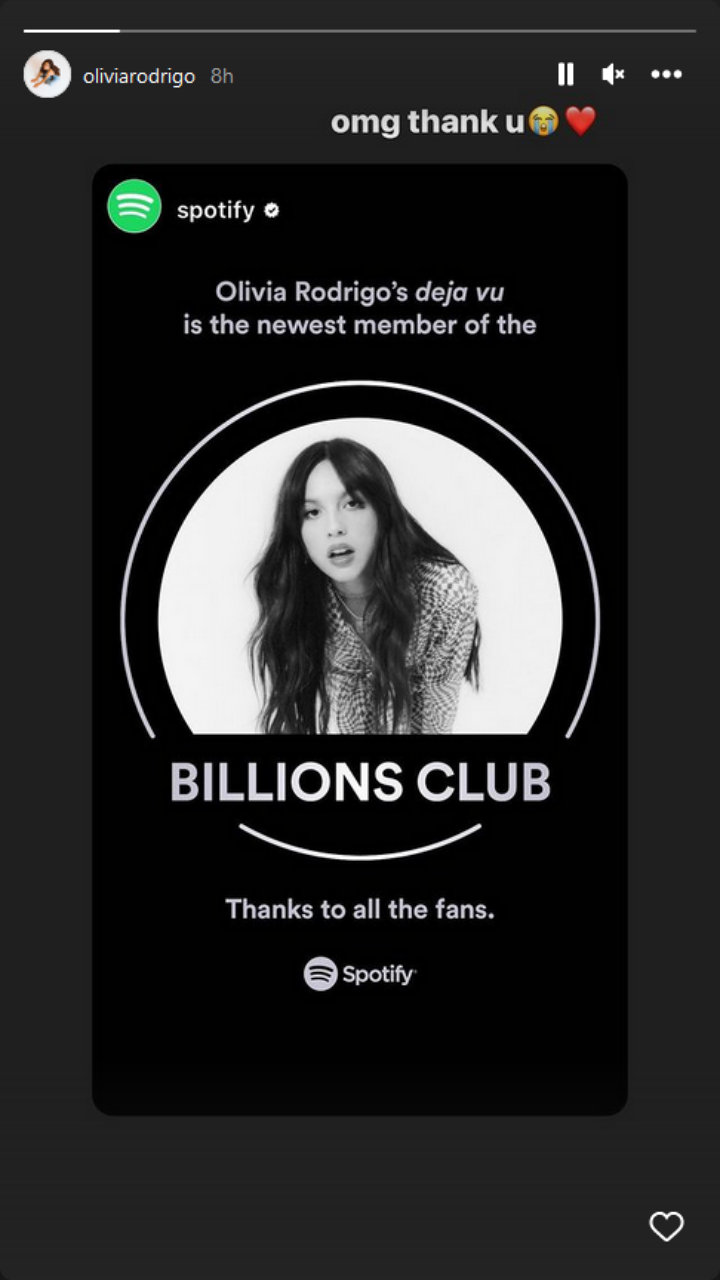 Olivia set the record as the first female artist to have three solo songs on a single album reach a billion streams on Spotify after "deja vu" exceeded the 1 billion mark on the streaming platform. The song joins "drivers license" and "good 4 u", which previously crossed the milestone. All three songs are lifted from her debut solo studio album "Sour" (2021).

While still riding high on the success of her debut album, Olivia has returned to the studio working on her second album. A studio snap was shared by Olivia's producer Dan Nigro on his Instagram Story in August and it confirmed a previous report that they were hard at work on the follow-up to her critically-acclaimed first album.

After the whirlwind success of her record-breaking debut LP, the singer reunited with the studio wizard behind all but one of the 11 tracks on the chart-topping 2021 record. A source recently said, "Olivia's debut was one of the biggest in years. She really did something special when she was in the studio with Dan. She wants the follow-up to evolve her sound so it isn't exactly the same."

"But she feels like she and Dan are a dream team when they get in the studio, so she is hoping they can make more magic together. Olivia had a few weeks off after the tour finished but she is champing at the bit to make headway on the second album," the source further dished. "The last 18 months have been a complete whirlwind and while there is no rush to get new music out, she doesn't want to leave it too long."