The 'Donda' artist, who didn't mince his words about his former mother-in-law in his Instagram rants earlier this month, takes a subtle jab at the Kardashian-Jenner matriarch with his social media activity.

AceShowbiz - Kanye West isn't done attacking Kris Jenner, apparently. The "Famous" hitmaker, who didn't mince his words about Kris in his Instagram rants earlier this month, took a subtle jab at the Kardashian-Jenner matriarch with his social media activity.

Fans noticed that Ye changed his Instagram profile picture to a picture of Kris. While his move doesn't violate any rules, he obviously did it to provoke "The Kardashians" star. It was only for a moment though, as Ye has now replaced the picture of his ex mother-in-law with a plain black image. 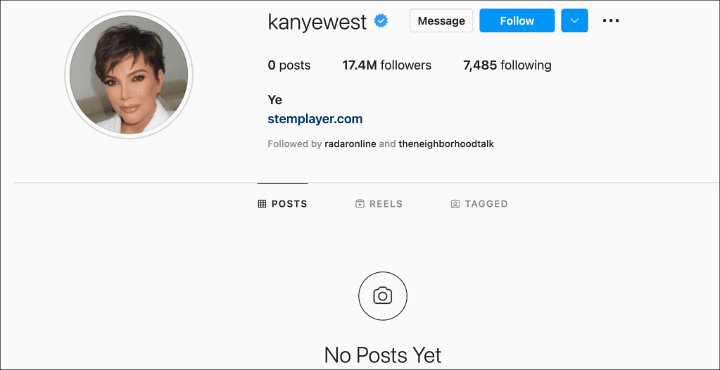 Prior to this, Kanye called out Kris in headline-making Instagram rants. On September 1, the Yeezy designer praised Travis Scott (II) and Scott Disick for standing up against the momager. "These my brothers I'm only one I ever seen stand up to Kris though," he wrote along with an image of Trav and Scott's name over a black screen. He then seemingly sent a message to Kris as writing, "Come fight me I love pain."

"Don't let Kris make you do playboy like she made [Kylie Jenner] and Kim do," the 45-year-old hip-hop star wrote on Instagram, alongside a photo of Kylie's former assistant, Victoria Villarroel. "Hollywood is a giant brothel Pornography destroyed my family I deal with the addiction instagram promotes it Not gonna let it happen to Northy and Chicago."

Ye then shared a screenshot of a message from Kim, who relayed a message from Kris. "From my mom- PLEASE. Tell him to please stop mentioning my name. I'm almost 67 years old and I don't always feel great and this stresses me to no end," Kim's alleged text read. To that, Ye replied, "Y'all don't have so so over my black children and where they go to school. They will not do playboy and sex tapes."

Ye also revealed that they were beefing over his and Kim's childrens' schooling. The rapper apparently wanted their children, who currently attend a leading private school in Los Angeles, to be transferred to his own newly opened Donda Academy. Ye declared, "My kids going to Donda. They not going to [their school]. [Charlamagne tha God] and Kris, get your motherf**king popcorn."

Not stopping there, the rapper additionally posted a screenshot of his text messages where Kim asked him "to stop." He responded to his ex's messages, "No, we need to talk in person, you don't have a say so of where the kids go to school. Why you get say say? Cause you half white?"

Later, Ye insinuated that he and Kim had found a solution regarding their children's education. "Hi guys I'm baaaaack Sorry to take so long to post I just had a good meeting with Kim about the schools," he announced on Instagram a few days after the Instagram tirade.