The 'Selling Sunset' star makes use of her Instagram account to address speculations that she doesn't want kids amid her relationship with the non-binary rocker.

AceShowbiz - Chrishell Stause is setting the record straight. Making use her Instagram account, the "Selling Sunset" star addressed rumors that she doesn't want kids amid her relationship with non-binary rocker G Flip.

The 41-year-old actress/realtor took to Instagram Story to shut down trolls doubting her plans to have kids. On Sunday, September 18, she asked her followers to "please stop asking" her whether she still wants to become a mom.

She additionally shared a screenshot of a DM that one individual sent to her. The person asked, "you didn't want to have children?" In response to that, Chrishell explained, "I understand being on 'Selling Sunset' entitles people to questions & my life in a way. But I am tired of this."

Noting that she plans on adopting, the ex-wife of Justin Hartley concluded, "Thank you for the love & support to others -I fell in love with a person. It's not that scandalous. Love is a beautiful thing." 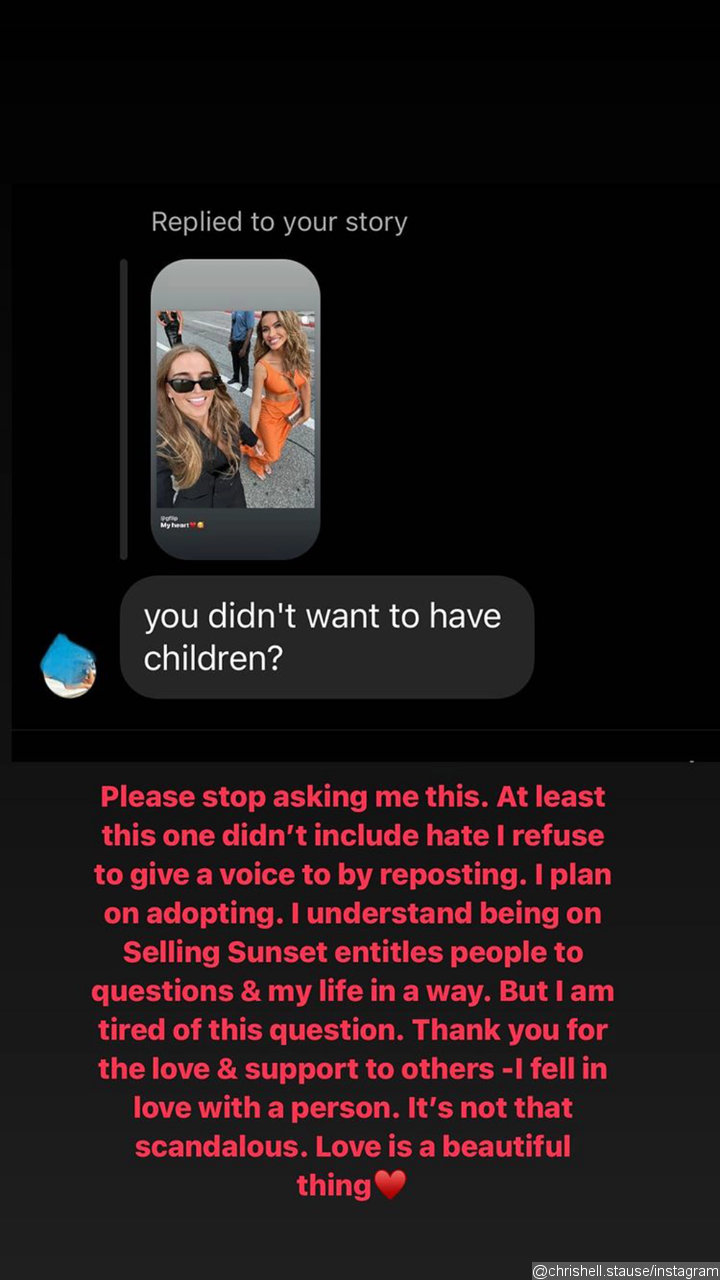 Chrishell Stause hit back at troll doubting her plan to have kids.

The former soap actress also responded to a fan who was "confused" because she had previously been "so set on making [her] own family." The "Days of Our Lives" alum explained, "I was looking to make a family with someone that wanted one as well." She seemingly referenced her December 2021 split from Jason Oppenheim as he doesn't want to become a father.

"If someone doesn't know if they will ever want to have a child and is not open to adoption, then those are two things that don't align for me," she went on to share. "Nothing but love for my last relationship. Just know that I am very happy and so is everyone involved."

G Flip also previously revealed that they wants to have kids. "I definitely see kids in my future," the 27-year-old musician, who uses they/them pronouns, said in a May episode of "People Every Day" podcast. "Right now, me and Chrishell know where we are in the stages of our lives."

Adding that they and Chrishell remain "very transparent," they believed that "two people who have the same sex organs can still have children."