The 42-year-old 'Wonder Woman' actor sets the record straight via his representative, saying that the rumors are just 'a blatant attempt to create drama that simply does not exist.'

AceShowbiz - Chris Pine proved that he has no issue with his "Don't Worry Darling" co-star, Harry Styles. The "Wonder Woman" actor has shut down rumors about the singer spitting on him at the Venice Film Festival, calling the claims "ridiculous."

The 42-year-old set the record straight via his representative. "This is a ridiculous story - a complete fabrication and the result of an odd online illusion that is clearly deceiving and allows for foolish speculation," the rep told PEOPLE Tuesday.

"Just to be clear, Harry Styles did not spit on Chris Pine," the rep further emphasized. "There is nothing but respect between these two men, and any suggestion otherwise is a blatant attempt to create drama that simply does not exist."

The rumors emerged after a video, which surfaced on Monday, September 5, showed Harry walking to his seat at Venice Film Festival. While slightly bending over his body, the pop star appeared to spit on Chris, who sat next to the crooner's girlfriend, Olivia Wilde.

Immediately after the former One Direction member made that motion, "The Contractor" star abruptly stopped clapping and looked to his lap before he started laughing as the brief video came to an end. Another clip showed a different angle of the pair's awkward exchange.

The footage caused quite a stir among many on Twitter, with one person who first posted the video saying, "this is all I can say: There are no trash cans in the Sala Grande, not in the lobby or in the mezzanine where these seats are located. So hypothetically, if you were chewing a piece of gum, there'd be no place to put it."

Another person commented, "Whether or not Harry spit on Chris is gonna be one of the great mysteries of our time. Like what Bill Murray whispered at the end of 'Lost in Translation' or 'Who Bit Beyonce?'." Someone else quipped, "the 'i did not spit on that man' notes app apology harry styles will soon be forced to tweet is already shaping up to be an all-timer."

Kim Kardashian Always Feels the Need to Prove Herself Despite Success

Chris Pine Recalls Being in Band With High School Teachers 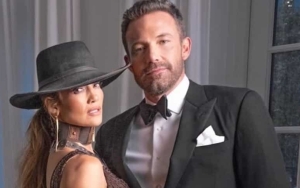 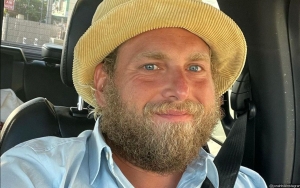