Prior to this, the 'RHOBH' alum was called out by TikTok user Bella Bernhardt, who shares screenshots of purported Instagram DMs with the TV personality that were sent in April.

AceShowbiz - Brandi Glanville is not sorry after messaging her teenage son's ex-girlfriend in a rage. "The Real Housewives of Beverly Hills" alum addressed the matter on her Twitter account on Wednesday, August 17 as she defended herself for the move.

"NOT SORRY!!! Mama Bear to the end," the 49-year-old TV personality said on the blue bird app. "That is all I'm going to say on the subject happy Wednesday." 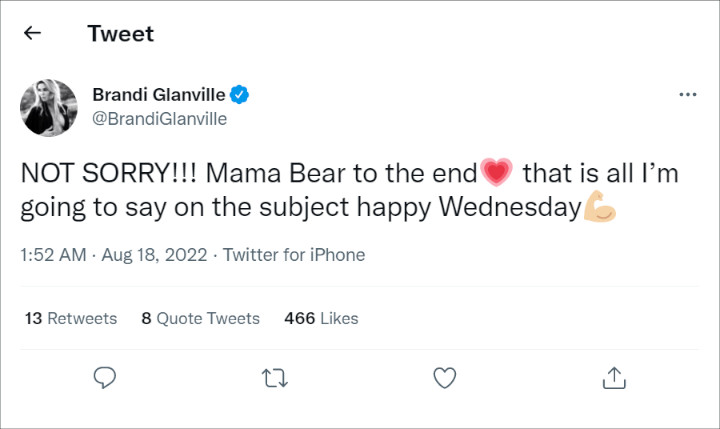 Brandi's tweet arrived after Bella Bernhardt took to her TikTok account to share screenshots of purported Instagram DMs with Brandi that were sent in April. The video saw Bella lip-syncing along to Sabrina Carpenter's "Because I Liked a Boy". "All because I dated a son of a Real Housewife of Beverly Hills," so Bella captioned the post, which has since been deleted.

In the exchange, the "Brandi Glanville Unfiltered" podcast host could be seen warning the 18-year-old blonde to "stop f**king" with one of her kids. She also told Bella, "I'm not f**king joking leave him alone and let him heal and stay in your own f**king [dorm] room," seemingly referring to her 19-year-old son Mason. "You don't get to have your f**king cake and eat it too you think you're crazy??? You don't wanna f**k with my crazy."

In response, Bella replied, "I'm not sure what [he's] been telling you but I have not been f**king with him at all by any standards or means. I told [him] I wanted to completely remove myself from his life for a while so he can heal, and he begged me to [not] do that." Bella additionally claimed that Mason invited her to hang out in his college dorm room multiple times and added that despite their split, the exes agreed to remain friendly.

The teen continued, "I'm not sure what [he's] telling you but I wouldn't to anything to f**k with [him]. I'm not a bad person." She added, "People break up and that is just something he has to deal with, I've had to deal with it too and it hasn't been easy for me either. But me breaking up with [him] does not make me a bad nor malicious person."

She concluded her message by telling Brandi it was "wildly inappropriate" for the reality TV personality to threaten "your son's 18-year-old ex-girlfriend," adding, "Please do not reach out to me like this again."

Brandi then showed remorse for being emotional. Acknowledging that she "shouldn't of [sic] been smoking and drinking at the same time," she admitted that she reacted without thinking. "I just hated seeing [him] so sad and I don't even know what I wrote and I'm not gonna look," the "Drinking and Tweeting" author explained. "I'm so sorry please forgive me."