The 'Star Wars: The Rise of Skywalker' star transforms into the singing diva with curly brunette bob hair while filming 'I Wanna Dance With Somebody' at a pier in Los Angeles.

AceShowbiz - Filming has officially kicked off on a Whitney Houston biopic. Cast in the lead role for "I Wanna Dance With Somebody", Naomi Ackie has been seen transforming into the late music icon for the first time.

On Thursday, August 11, the London native was spotted on the set of the movie in Los Angeles. The actress appeared to channel the R&B diva Houston, circa 1980s-early 90s with Houston's trademark curly brunette bob hair.

The 29-year-old wore a blue and pink 1980s-inspired one-piece swimsuit, along with a multi-colored sarong wrap that covered much of her lower body and white slip-on sandals. She had a pale pink headband on and accessorized with some necklaces and bracelets.

Ackie appeared to be in good spirits, flashing a huge smile while walking along a dock where a white boat was anchored. She was holding her phone and some other stuff while talking to a crew member. 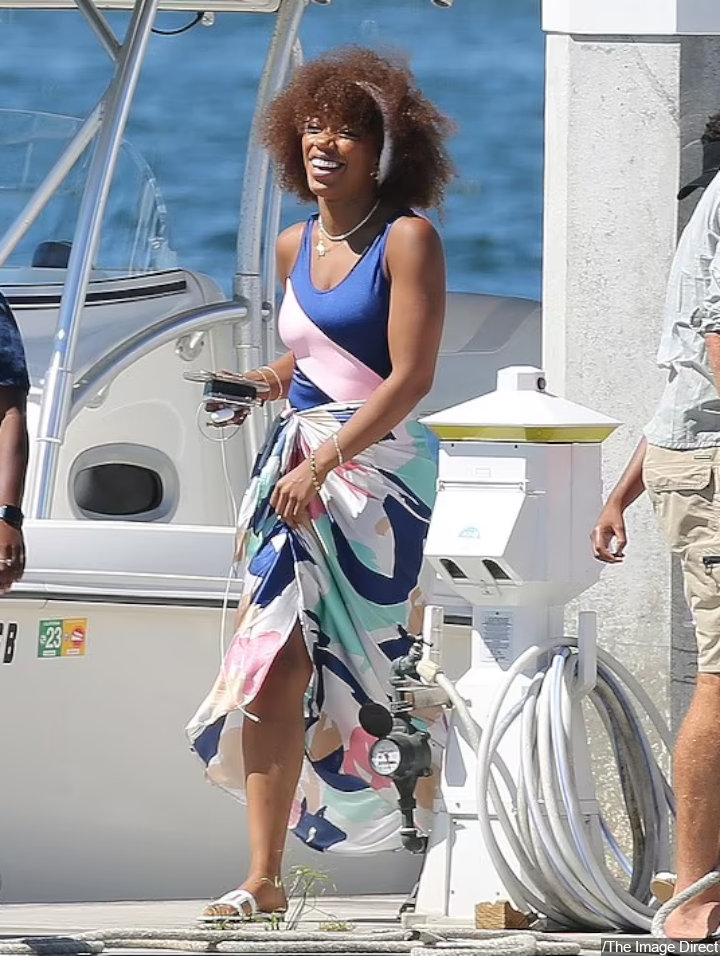 Naomi Ackie transformed into Whitney Houston on the set of 'I Wanna Dance With Somebody'.
See also...

Ackie was announced to play Houston in "I Wanna Dance With Somebody" in December 2020 after "an exhaustive search." Stella Meghie, who was on board to serve as director, said in a statement at the time, "We spent the better part of the last year in an exhaustive search for an actress who could embody Whitney Houston."

"Naomi Ackie impressed us at every stage of the process," the filmmaker gushed. "I was moved by her ability to capture the stage presence of a global icon while bringing humanity to her interior life."

However, Kasi Lemmons later took over directing duties from Meghie, who is now still attached to the project as an executive producer.

In April of this year, Ackie talked to Entertainment Tonight about preparing for the role. "I'm going to try my best because that woman -- it sends shivers down my spine how much she means to me, the world, black women, African American women. I'm going to throw my everything into making sure she is represented properly," she shared. "I just want to tell her story. And I think when I'm able to simplify it down to that, I'll be able to handle the pressure."

Ashton Sanders stars as Bobby Brown, with Stanley Tucci cast as Clive Davis. Nafessa Williams, Clarke Peters and Tamara Tunie also star in the biopic, which is currently slated for a December 1 release.