The 'Girls Gone Wild' founder defends himself after posting a throwback photo of him and 'The Kardashians' star hanging out together on a yacht to celebrate her first legal birthday.

AceShowbiz - Joe Francis has broken his silence after facing backlash on social media. The "Girls Gone Wild" founder has defended himself after he was accused of "checking out" 18-year-old Kylie Jenner.

On Wednesday, August 10, the 49-year-old film producer made use of his Instagram page to defend himself after he posted a photo of him and Kylie, who donned a white bikini, hanging out on a yacht. "i'm a man. All straight men always are looking at beautiful women. That's why I'm so successful," he wrote.

"Are you saying you hate God for making us this way? no other straight man is different or girls gone wild wouldn't of made billions of dollars," Joe added. The entrepreneur further stressed that Kylie "is like my sister," before blasting the troll, "I think you're the creepy one. Why would you even think that. I used to date her sister [Kourtney Kardashian] I have three sisters too. I would never ever have sex with my sisters. That's gross!!" 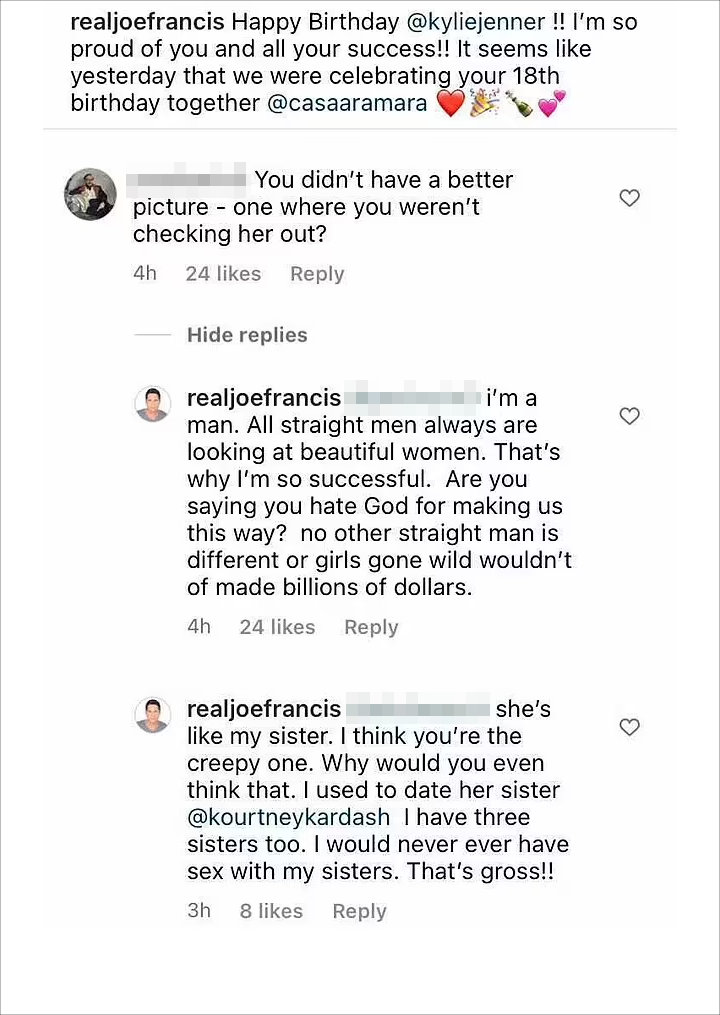 Joe Francis defended himself after he's accused of 'checking out' Kylie Jenner when she was 18 years old.
See also...

Joe was criticized after he posted a birthday tribute to Kylie, who turned 25. Along with a throwback snap of the pair celebrating "The Kardashians" star's first legal birthday, he wrote, "Happy Birthday @kyliejenner!! I'm so proud of you and all your success!! It seems like yesterday that we were celebrating your 18th birthday together [at the Casa Aramara resort in Punta de Mita, Mexico]."

The photo saw him clearly looking at Kylie's famous backside as she rocked a white bikini while they hung out on a yacht. Upon learning the naughty picture, social media users made wisecracks about him staring "at them cakes," with one asking the entrepreneur directly, "You didn't have a better picture - one where you weren't checking her out?"

Another labeled Joe "creepy" for staring at Kylie's curves. "Eww so creepy. You obviously look at them cakes," the said person commented, while someone else wondered, "Did they go wild," along with winking face with tongue emoji.