Pardison Fontaine makes use of his social media account to share his response after the actor excitedly said that he would be the 'Sweetest Pie' raptress' pet.

AceShowbiz - Megan Thee Stallion's boyfriend Pardison Fontaine has shared his reaction after Dwayne "The Rock" Johnson shot his shot with the raptress. Making use of Twitter, the "Backin' It Up" rapper insisted that he is not "mad," though many people believed he is.

On Monday, August 8, the 32-year-old hip-hop artist, born Jorden Kyle Lanier Thorpe, tweeted, "Woke up to chaos on the apps [laughing with tears emoji]." In a follow-up post, he said, "Of all the things to be worried about y'all think I'm mad at the Rock."

"The comment started all our dogs #s and ended with Moana is my s**t," Pardi, who started dating Megan shortly after she was shot in her foot in the summer of 2020, added in a separate tweet. "I deleted it (yesterday).. cus it seem like ppl took it wrong .. thought maybe my joke was in poor taste." 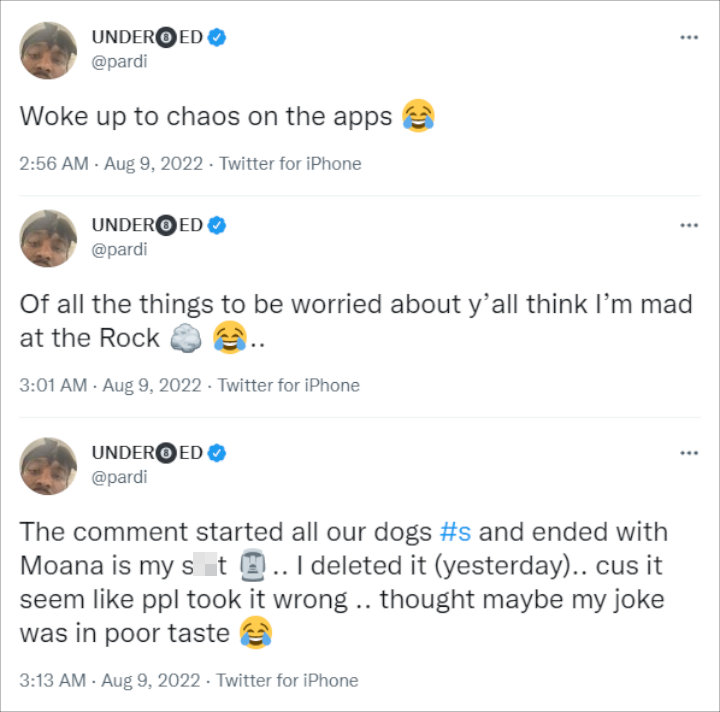 The deleted tweet in question read, "All our dogs named after #s. Just teach your wife to use seasoning." The "Hoop Earrings" artist further penned, "You'll be iiight ... Moana is the s**t tho." Many believed that Pardi's "seasoning" comment is in reference to Dwayne's wife, Lauren Hashian. The 55-year-old hunk also starred in the 2016 animated film "Moana" as Maui.

Dwayne shot his shot with Megan during an interview to promote his new movie "DC League of Super-Pets". During the short interview, the "Red Notice" star and his co-star Kevin Hart were asked by the interviewer, "If you could be any celebrity's pet, who would you be?"

Without skipping a beat, Dwayne responded that his ideal owner would be hip-hop star Megan, prompting Kevin, who said that he'd love to be Denzel Washington's pet, to wince and laugh. In response, the interviewer said, "Oh, that's a good one. Why Megan The Stallion?" Reacting to the question, the "Jungle Cruise" actor coyly responded, "Oh, we don't need to talk about that."

YK Osiris Speaks Against Unprotected Sex: It's Nasty and Disgusting