A year after the 'Big Gangsta' rapper curved the influencer, who has now become his apparent muse, the pair get flirty on the blue bird app before things take a racy turn.

AceShowbiz - Things seemingly heated up between Kevin Gates and Brittany Renner. A year after the rapper curved the influencer, the pair caused social media frenzy as they got explicit while flirting on Twitter.

It started with Brittany writing on the blue bird app, "I want to be held and penetrated passionately." Catching wind of the tweet, Kevin replied, "When?" Brittany revealed that she wanted it immediately as she simply said, "Right now."

Kevin wasn't going to miss that. "Yes mam, Right away mam," he said in his reply, adding hashtag #D**kAlliNYoStomach in the end of his tweet. 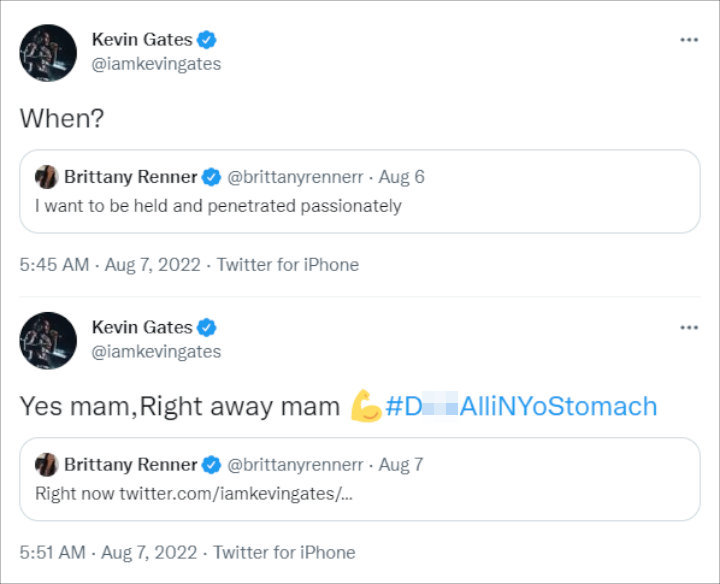 Kevin Gates and Brittany Renner got explicit while flirting on Twitter.
See also...

The flirty interaction came after Brittany posted a video of Gates embracing her following his performance at Rolling Loud, which she described as a "full-circle moment." She wrote, "My 1st @RollingLoud was Miami 2019 and the only person I wanted to see perform was @iamkevingates. Last night was a full circle moment for me! Kevin, I love you. You are an amazing person and have been my greatest teacher."

Kevin, meanwhile, made it sure that everyone knows that Brittany is his muse by including a few references to the influencer on his new album "Khaza". In addition to making shout-out to her on "Super General", Kevin had Brittany as the leading lady in the "Bad For Me" music video. The visuals sees Brittany trying to seduce Kevin as she plays on her reputation as being trouble.

Kevin wasn't the only one who set his eyes on Brittany. In July, Kodak Black shot his shot with the Internet personality during an interview with her following his Rolling Loud performance. He asked Brittany about her drink of choice and she told her that she enjoys tequila. Upon hearing her answer, Kodak suggested, "My name Yak so you gotta drink cognac."