The 'Anaconda' raptress likes a post about her nemesis' response to a fake assistant's claim that the Harajuku Barbie spoke negatively about the Bronx femcee's child.

AceShowbiz - Nicki Minaj is showing sign that she's ready to move past her long history of feud with Cardi B. The "Anaconda" hitmaker may be ready to bury the hatchet with her nemesis following the fake assistant controversy, which somehow dragged the Bronx femcee.

In late last month, someone who goes by @katemiller_7 on Instagram spilled some tea about Nicki in a series of Instagram Stories. Among the bombshell claims was that the Trinidadian raptress spoke negatively about Cardi's daughter Kulture.

Responding to this story, Cardi appeared to defend Nicki as she refused to believe the said Instagram user's claim. "No, a lot of blogs hit me up asking me about that bulls**t that was going on two days ago. And I told everybody, 'No, that is not true,' " she stated.

She went on to say, "There was lies talking bout 'oh Mike WiLL Made It told you this and that and said this about your kid,' no. That is not true, that is not true." She added of her interview with YouTuber Armon Wiggins, " 'Have you reached out this and that'- no. it's not true, I think it's false, I think it's a troll. And that what I told Arman and what I told everybody else."

Nicki apparently caught wind of Cardi's take on the situation. After Onsite posted audio of the "Bodak Yellow" hitmaker's comments, she liked the post. 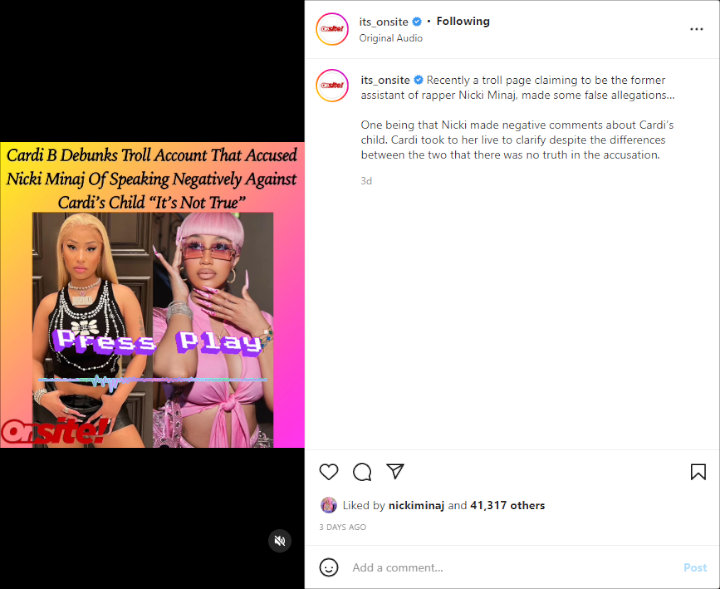 Nicki Minaj liked Cardi B's response to a fake assistant's allegations about her.

Nicki herself earlier laughed off the fake assistant's allegations. Hopping on Instagram to address the baseless rumors, she pretended to be crying and admitting to some of the allegations, before calling the allegations "dumb."

"My assistant, y'all they went and told everybody that it is true I owe a hundred million dollars to IRS," she said while someone was heard laughing in the background. She also jokingly admitted that her hairstylist Tae "is so uncomfortable around," but ended up cracking up.

She then blasted the allegations as saying, "The tea sounds so f**king dumb. And for a person to believe it you would have to be dumb." She added of the person who tried to expose her, "It's clearly a kid. Do you know how much money you have to make to owe that amount of money to IRS?"

Nicki and Cardi's feud dated back to 2017, when the latter broke out on the rap scene and was instantly compared to the "Bang Bang" raptress. The tension culminated in an altercation at New York Fashion Week in 2018, during which Cardi reportedly approached Nicki about "spreading lies" and Cardi threw her shoe at Nicki.