Celebrating the news that Destin Daniel Cretton will be serving behind the lens for the fifth 'Avengers' movie is 'Shang-Chi and the Legend of the Ten Rings' actor Simu Liu.

AceShowbiz - Marvel Studios is moving fast with its next "Avengers" movie. Just days after announcing the project at San Diego Comic-Con 2022, the studio has tapped "Shang-Chi and the Legend of the Ten Rings" filmmaker Destin Daniel Cretton to direct "Avengers: The Kang Dynasty".

Confirming the news, "Shang-Chi" star Simu Liu tweeted The Hollywood Reporter's article of Cretton's involvement in the project. He captioned the Tuesday, July 26 post, "Three years ago at SDCC 2019 Destin and I sat backstage at Hall H watching some of the most famous people on Earth take the stage. We looked at each other like 'damn, is this really happening to us right now?' " adding, "IT'S F**KING HAPPENING BROTHER!" 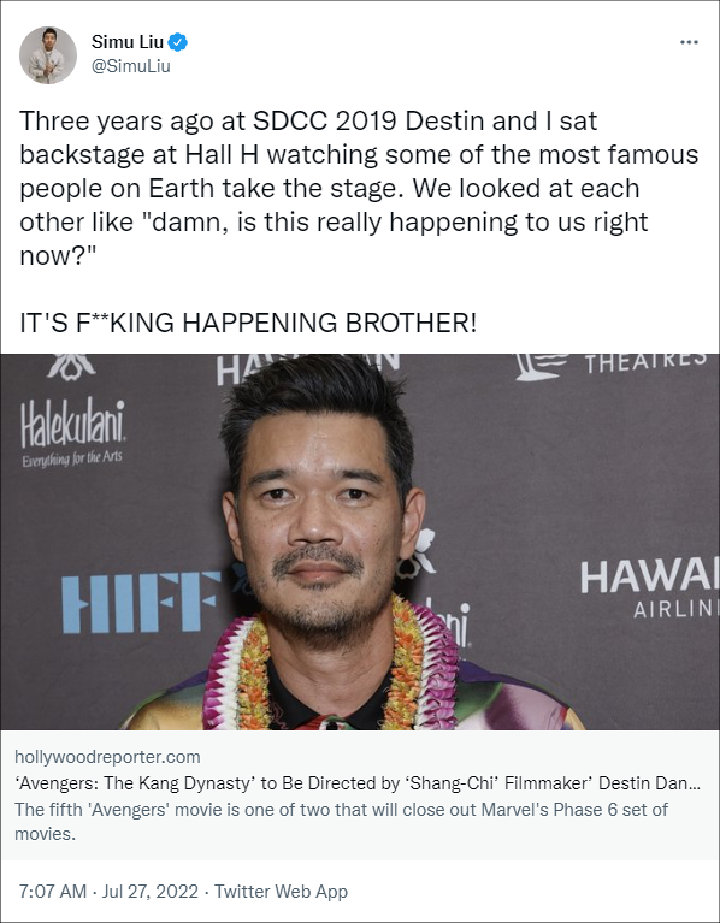 Liu also responded to a fan who wondered what the news means to "Shang-Chi" sequel. Playing coy, the 33-year-old hunk posted a gif that stated, "Stay tuned."

There isn't much known about "Avengers: The Kang Dynasty" aside from what Kevin Feige shared at the SDCC. During Marvel Studios' panel over the weekend, he announced two new "Avengers" movies and a new "Fantastic Four" reboot as part of Phase Six.

As for Phase Five, it will include "The Marvels", which will open in cinemas on July 28, 2023, "Blade", which will be out on November 3, 2023, and "Captain America: New World Order", which is set for release on May 3, 2024. On the small screen, Disney+ will have the second season of "Loki", as well as "Agatha: Coven of Chaos" and "Daredevil: Born Again" that will bring back Charlie Cox and Vincent D'Onofrio in their respective roles.

Kang the Conqueror (Jonathan Majors), is expected to be the major villain in the fifth "Avengers" movie.