Kris Jenner's eldest daughter makes use of her social media platform to set the record straight after an Instagram page pretending to be her son claims her sister held a bachelorette party.

AceShowbiz - Kourtney Kardashian is setting the record straight. The eldest daughter of Kris Jenner has spoken out after an Instagram account claiming to be her son Mason Disick claimed Kylie Jenner and Travis Scott (II) are engaged.

On Thursday, July 21, the Poosh founder turned to her Twitter account to clarify the rumors. "Hello everyone, hope it is a beautiful Thursday," she began. "After months and months of thinking you would all know that is NOT Mason on these fake accounts, some of you don't. So I will spell it out clearly : that is NOT Mason on these fake social media accounts talking about our family."

In a following tweet, Kourtney wrote, "To any and all 'news' outlets who use that false account as a source, you know better. Stop using it for the benefit of your slow news day please and thank you." She then blasted, "And to the person relentlessly pretending to be Mason, ultra ultra ultra creepy." 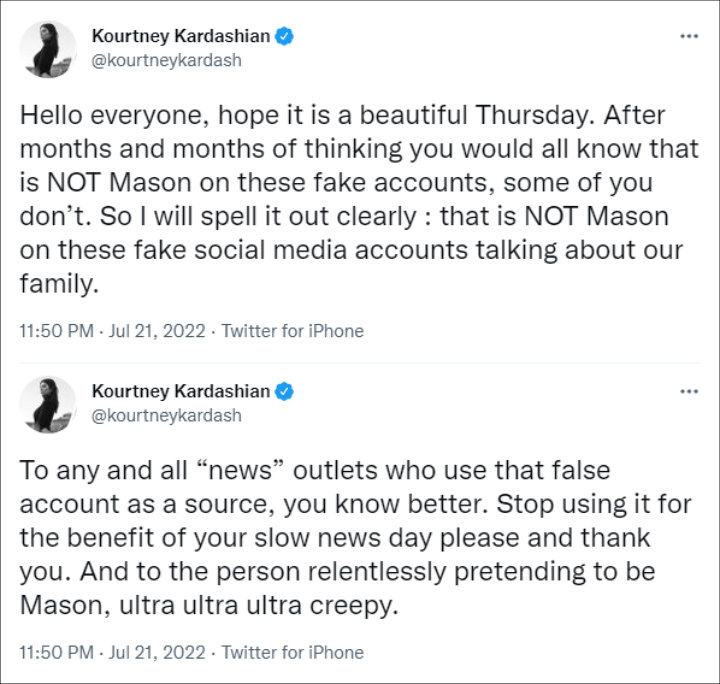 The reality star's clarification came after an account pretending to be her eldest child alleged that Kylie recently celebrated a bridal party. "Hey guys! Mason here you're [sic] favorite person LOL. Here's an update on life," the post read, per Radar Online. "Kylie is getting married and … that's why she's the only one wearing white!!!"

The user even shared screenshots of text messages that the Kylie Cosmetics founder allegedly had sent to her nephew. "You need to stop," read the first text, followed by, "Delete that now" and "MASON."

Earlier that day, Kylie took to her TikTok account to share a clip that saw her sporting a white cone-bra minidress. She was out at Giorgio Baldi in Santa Monica with her older siblings Khloe Kardashian and Kim Kardashian and her friends Stassie Karanikolaou and Yris Palmer.

Further fueling speculations that she and Travis are engaged, Kylie posted another clip on the video-sharing app that saw her rocking a sparkling band on her ring finger. In it, Travis could also be seen casually putting his head on top of her body.

Fans were quick to flood her post with questions about whether the pair are getting married soon. "Ring on her wedding finger??" one person commented, with another adding, "Are you guys getting married??!!" A third chimed in, "Is that a wedding ring?" while someone else wondered, "Does she want to show us her ring?"

This Is Why Jessica Alba Goes to Therapy With Both Daughters

This Is Kourtney Kardashian's Perfect Response to Pregnancy Rumors