The Blink-182 drummer is photographed lying on a stretcher outside of Cedars-Sinai Medical Center while his reality TV star wife follows on foot after he tweeted, 'God save me.'

AceShowbiz - Travis Barker was raced to hospital with wife Kourtney Kardashian at his side. After he messaged fans, "God save me," the Blink-182 drummer was photographed lying on a stretcher outside of Cedars-Sinai Medical Center while his reality TV star wife followed on foot.

The 46-year-old was seen being wheeled out of the ambulance while holding up his right hand, revealing his distinct skull tattoo. His wife, in the meantime, was only seen from the back dressed head-to-foot in black with a hoodie covering her head.

Kardashian's security team followed in a black Range Rover, tailing the ambulance carrying Barker as they arrived at the hospital in Los Angeles. The two vehicles then appeared to enter through the wrong entrance and were redirected by hospital workers to another area.

Barker and Kardashian first arrived at West Hills Hospital and Medical Center on Tuesday morning, June 28 to get treatment for Barker's mystery issue. TMZ reported staff at West Hills felt the musician needed additional care, so he was rushed to Cedars-Sinai.

Barker's "God save me" tweet at 10.45 A.M. local time apparently came amid his medical emergency. Hundreds of the rocker's fans responded to his tweet with droves of them tweeting the phrase, "I'm f***** up." 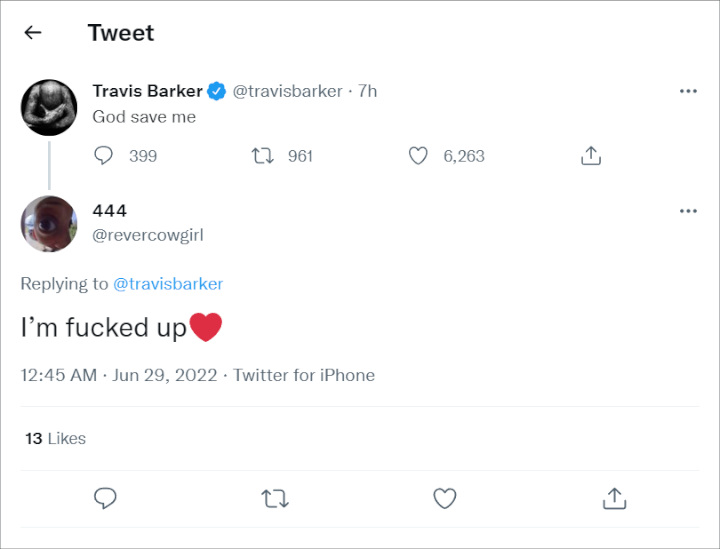 The hospital trip came after a turbulent few weeks for Barker and Kardashian, who recently recovered from her second bout of COVID after the pair got hitched in their third and most lavish yet wedding ceremony in Portofino, Italy.

The reports also came as Barker's 18-year-old son Landon Barker was said to be dating 18-year-old TikToker Charli D'Amelio. A source told PEOPLE, "They're seeing each other, and it's early stages."