The 'Luther' star says 'it was a lot of fun' finding the right way for his alter ego to speak, gushing, 'I loved the chance to explore different Sonic sounds and different places my voice could go with him.'

AceShowbiz - Idris Elba had "a lot of fun" finding Knuckles' voice for "Sonic the Hedgehog 2". The "Luther" star appeared as the hot-headed warrior in the animated movie sequel and he had a great time finding the right way for his alter ego to speak.

"I thought, 'Is he American? English?' So, I loved the chance to explore different Sonic sounds and different places my voice could go with him," the 49-year-old actor said. "It was a lot of fun."

Idris was given a lot of input into making Knuckles "likeable." He said, "I just loved creating his personality. Knuckles is such a mystery. We know a little bit about him and what he looks like; he has big fists so he is Knuckles alright!"

"But the team wanted me to help create Knuckles' character. He is a good guy with a very stern voice," he added. "It was fun trying to make him likeable and formidable."

And the "Fast & Furious Presents: Hobbs & Shaw" actor even saw similarities with himself. He explained to Cocoa Boy magazine, "I am not really good at small talk and neither is Knuckles."

It was recently confirmed a third movie in the franchise is on the way, while Idris' Knuckles is getting a spin-off series. Paramount announced, "#SonicMovie3 is officially in development from @ParamountPics and @SEGA! Plus, next year a new original #Knuckles series with @IdrisElba is coming to #ParamountPlus. #SonicMovie2 hits theaters April 8! (sic)" 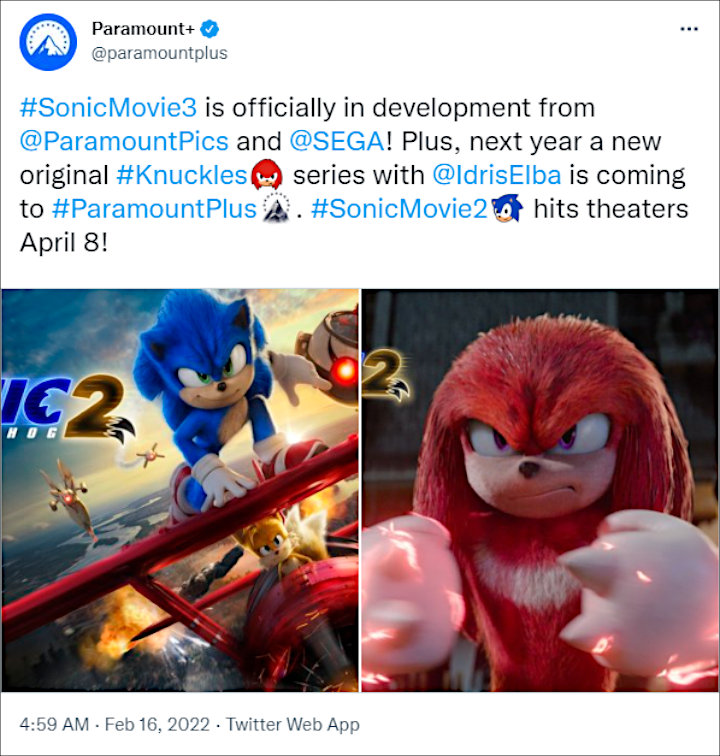 'Sonic the Hedgehog 3' is officially announced.

In light of Jim Carrey, who plays Dr. Ivo Robotnik, recently announcing he is planning to retire, "Sonic 2" producers Toby Ascher and Neal H Moritz have ruled out recasting the character for the third film.

Serena Williams Left Daughter's Tennis Coach Oblivious of Who She Was