After the 'F**kin' Problems' spitter was arrested at Los Angeles International Airport, the co-founder of the hip-hop collective calls out A$AP Relli for being a 'rat.'

AceShowbiz - A new report on A$AP Rocky's arrest has revealed a shocking detail. According to A$AP Bari, the "Praise the Lord (Da Shine)" hitmaker was betrayed by one of his own associates, who is none other than a fellow A$AP Mob member.

On Thursday, April 21, the co-founder of the New York hip-hop collective accused A$AP Relli of snitching on Rocky. He took to Instagram Story to call out Relli for calling the cops on the 33-year-old star.

"This rat a** n***a told on Rocky f**king rat," he wrote along with a photo of Relli standing outside a car. "@relli_boss why you went to the police," he added in another Story featuring the same picture. 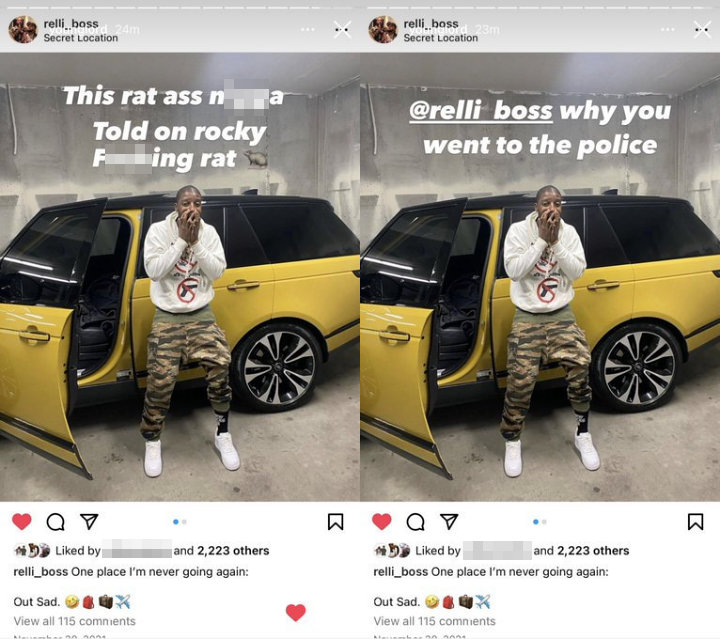 Relli has not responded to the snitching allegations, while Rocky has not addressed his arrest.

Rocky was taken into custody by the Los Angeles Police Department at Los Angeles International Airport on Wednesday, following his arrival from Barbados with his pregnant girlfriend Rihanna. It's reported that he was taken out of the terminal in handcuffs. The LAPD made the arrest with help from Immigration and Customs Enforcement's Homeland Security Investigations.

The LAPD later detailed the arrest via Twitter. "Early this morning, LAPD officers arrested Mayers for assault with a deadly weapon (firearm) at the Los Angeles International Airport," read the tweet. "The case will be presented to the Los Angeles County District Attorney's Office for filing consideration."

Following his arrest, it's reported that police finished their search at Rocky's house as they left with a box of potential evidence. He was released several hours later after posting a $550k bail.

The arrest stemmed from a November 6, 2021 incident, during which he reportedly shot at an alleged victim three to four times near Vista Del Mar and Selma Avenue around 10:20 P.M following an argument. The victim sustained a minor injury from the incident and later sought medical treatment.