According to the Indianapolis Metropolitan Police Department, a fan causes ruckus by making a false bomb threat to jump line at the singer's free concert in Indianapolis, Indiana.

AceShowbiz - Fans seemingly will do anything to see their idols better at concerts. A man was arrested on Saturday night, January 8 for causing ruckus by making a false bomb threat to jump line at Doja Cat's free concert in Indianapolis, Indiana.

According to the Indianapolis Metropolitan Police Department, the incident took place in the security line for AT&T's Playoff Playlist Live! at Monument Circle. Nearby witnesses reportedly told the authorities that the man claimed to others that he had a bomb or explosive in his backpack.

However, the IMPD quickly confirmed that the backpack was clean. The man is currently in custody. Due to the incident, the concert, which also featured performance by band AJR, was slightly delayed but managed to continue as planned following the arrest.

After the incident, the IMPD took to its official Twitter account to issue a statement regarding the situation. "IMPD has arrested a man who was trying to get through the security line for AT&T's Playoff Playlist Live at Monument Circle. Nearby witnesses told police the individual said he had an explosive on him. IMPD officers responded, searched his bag an did not find an explosive," the statement read.

"The man had unrelated outstanding warrants was immediately arrested for those. He currently is in police custody," it continued. "Police believe there is no active threat and the investigation is ongoing. Tonight's activities and concert for CFP will continue as planned." 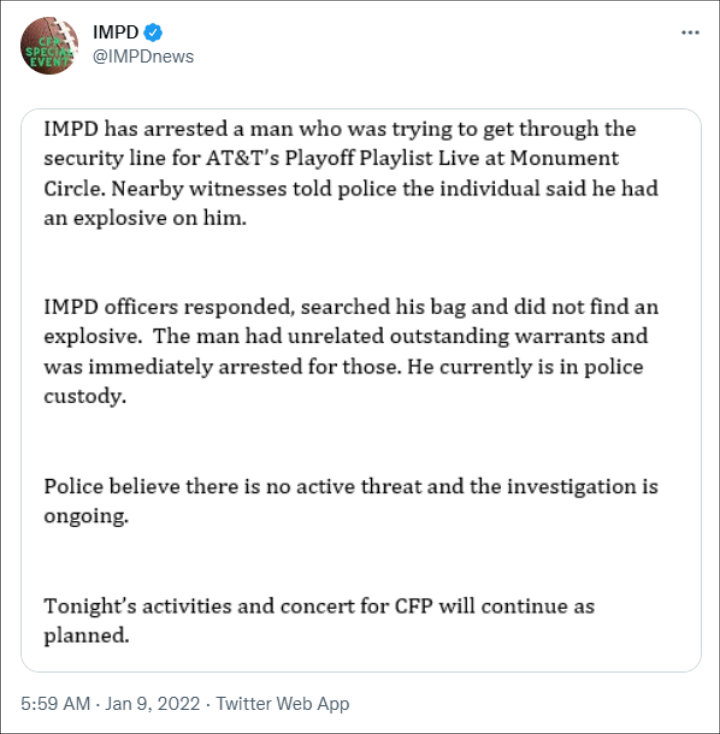 The IMPD addressed the bomb threat in a statement.

Deputy Chief Joshua Baker also issued a statement to the IndyStar via text message. "A fan wanted to advance in line so he exercised very poor judgment and told those around him in line he had a bomb in his backpack," he said. "Someone did the right thing and alerted IMPD. The backpack was clean."

Prior to this, some concertgoers shared the chaotic scene on social media. "Just waited 4 hours to see doja cat for their [sic] to be a literal bomb threat(???) scariest moment of my actual life the ground was covered in ice we were all running and slipping around literally so scary," one person wrote on Twitter. Another user added, "We were considering leaving before the bomb threat happened. Saw the front of the line push everyone back and dipped out of there. Not going back."

Representative for Doja has yet to comment on the situation.