The 'Happy Little Pill' hitmaker explains that he receives a noise complaint which makes the city turn off his speakers while he's singing his new single 'Angel Baby' at the AD100 party.

AceShowbiz - Troye Sivan has made it clear that he doesn't want to disappoint his fans. The "Angel Baby" singer has issued an apology on his social media account after his performance in Miami was shut down by the city.

"GUYS lol wtf the city shut down the show," the 26-year-old crooner tweeted on Wednesday, December 1. In a following Twitter post, he continued explaining, "Okay so basically i played 5 songs tn and Angel baby was the LAST ONEEEE and the only one being streamed live on tiktok."

"But then turns out throughout the show we got a noise complaint and the city literally came and shut down our speakers during Angel Baby," Troye continued. The "Happy Little Pill" crooner concluded his message by saying sorry to the audience and his fans, "I'm sorry to anyone who woke up at a weird time to watch the stream :/// i feel fine about it and had fun until then lol but I'm sorry if it was a mess to watch from home." 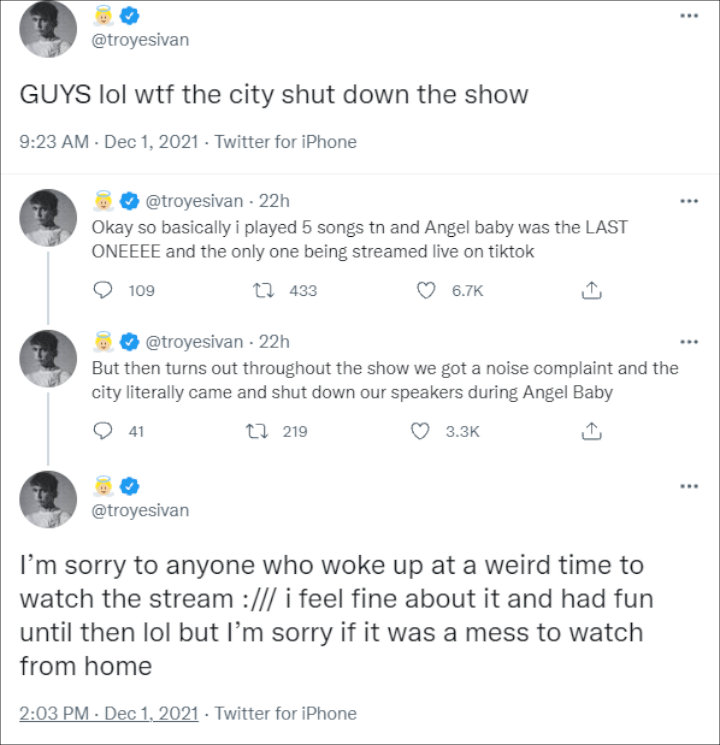 Troye Sivan apologized to his fans after his performance in Miami was stopped by the city.
See also...

In response, many of his fans showed support to him. "This is not your fault okay? <3," wrote a fan. Another chimed in, "a noise complaint? surely you weren't the first ever to perform at that venue?? it's very upsetting that this happened to you, our angel baby [sparkling heart emoji].. we are fine but so sweet of you to think of us. i'm so pissed at those complainers though."

In a video surfacing online, Troye could be seen singing on stage wearing a sheer blue tank top and a pair of black straight cut jeans. While singing his newest track "Angel Baby" at the AD100 party in celebration of Art Basel Miami on Tuesday night, November 30, suddenly his speaker was turned off.

"Wait...what?" confused Troye could be heard saying in the video. "So should we stop? Oh, we have to stop the show for real. Sorry guys. So..should I leave?" After the staff confirmed that he had to stop his performance, the "Blue Neighbourhood" artist said, "Okay, I guess that's the end. I don't really know what's going on," before noting, "I don't know what the f**k is going on!" Also in attendance at the event, which was held in partnership with Lenovo Yoga and Intel, were Venus Williams, Adam Levine and Behati Prinsloo and Pharrell Williams.