The former 'Jersey Shore' star makes her romance with Justin May Instagram official by sharing a photo of her with her new man, after she called it quits with Christian Biscardi in June.

AceShowbiz - Sammi Giancola, also known as Sammi Sweetheart, has found a reason to be grateful this Thanksgiving. Celebrating the holiday, the reality TV star debuted her new romance on social media, several months after ending her engagement to Christian Biscardi.

On Thursday, November 25, the former "Jersey Shore" cast member took to her Instagram to share a snap of her and her new man Justin May sharing an embrace at what looks like a pub. The pair wore matching outfits with a black top, jeans and black boots.

Underneath the photo, she added a caption which read, "Thankful." While the Story has since expired, Sammi posted the same image on her Twitter page and wrote along with it, "Happy Thanksgiving." 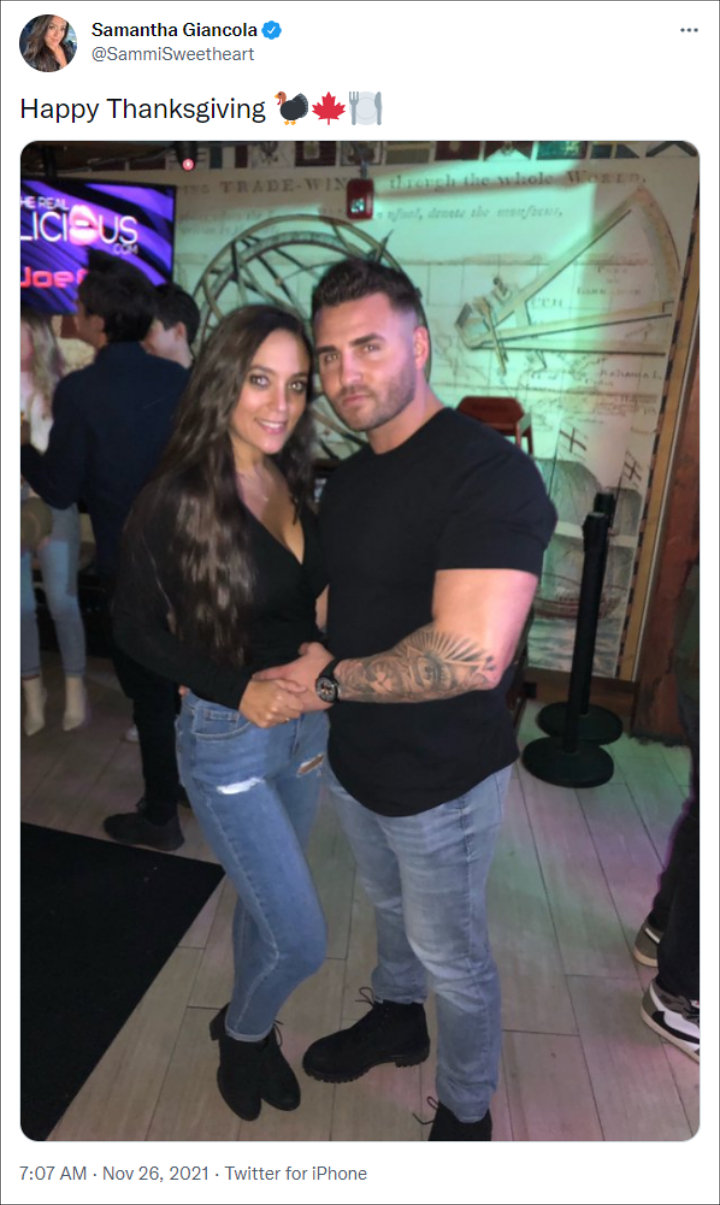 The 34-year-old was soon showered with congratulatory messages from her fans after she gave an update on her relationship status. "Sammi nice to see you doing well. Kudos to you the strong one!" one person wrote. Another replied to her tweet, "You look amazing Sammi! You too make a beautiful couple."

It's unknown how long Sammi has been dating Justin, but her post came four months after she confirmed her breakup from her former fiance Christian. The former lovers sparked split rumors in June when they unfollowed each other on Instagram in June.

Later in July, when answering questions from her followers on TikTok, Sammi wrote, "yes," after being asked, "Are you single?" When another user wondered whether she was happy, the MTV personality replied, "YESSS!"

A source told Us Weekly in August that their split was amicable. "There was no drama. They planned on getting married in 2020 but then COVID hit and they had to reschedule their wedding date. Eventually they just called it off completely," the source explained.

Sammi got engaged to Christian in March 2020 after two years of dating. She was previously in a longtime relationship with her "Jersey Shore" co-star Ronnie Ortiz-Magro. They were in an on-and-off romance from 2009 until 2016.