The 'Shallow' singer praises the 'Toxic' hitmaker for empowering many people, whereas Iggy Azalea claims that the pop star's court win really makes her smile.

AceShowbiz - Lady GaGa "couldn't be more happy" for Britney Spears after she won her conservatorship battle last week (ends November 12). The pop star has taken to social media to lavish praise on Britney after she was released from her 13-year conservatorship.

"I have loved @britneyspears her whole career," the "Poker Face" singer wrote on Instagram. "I looked up to her, admired her strength - she empowered so many people and still does. I couldn't be more happy for you today. You never deserved what happened, Thank God 4 today you're a superstar and a super-human being (sic)."

Iggy Azalea also welcomed the news on her Twitter account, writing, "I don't think there's a person alive on this planet happier than Britney Spears today & the thought of that really makes me smile." 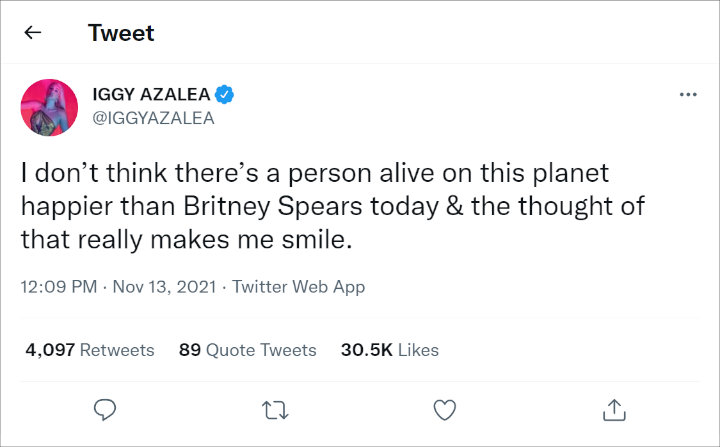 Britney herself heralded the "best day ever" after Judge Brenda Penny ended her conservatorship. The pop star addressed the ruling on Instagram with a video of her fans popping confetti outside the courthouse in Los Angeles.

Mathew Rosengart, Britney's attorney, also spoke about the court ruling shortly after it was announced. He told fans outside the courthouse,: "What's next for Britney - and this is the first time that this can be said for about a decade - is up to one person: Britney."