The 'Saturday Night Live' cast member and the 'Top Chef' host, however, are not alone during the basketball match outing as they are joined by Chris Rock in a photo shared by the model on Twitter.

AceShowbiz - Pete Davidson apparently doesn't have a problem hanging out with another newly single celebrity while he is rumored dating Kim Kardashian. The comedian has been pictured with Padma Lakshmi, days after he reportedly went for dinner with the estranged wife of Kanye West.

It was the author herself who shared the photo of her basketball match outing with Pete. In the picture she posted on Twitter on Monday, November 8, she appeared to take the group selfie with her phone camera while the "Saturday Night Live" star, who sat next to her, smiled and showed a V sign, flashing his green nails.

The two stars, however, were not alone during the weekend outing. They were joined by Chris Rock in the image, sitting to the further side of Padma and next to Pete. "Last night at Madison Square Garden," so the "Top Chef" host captioned the snap. 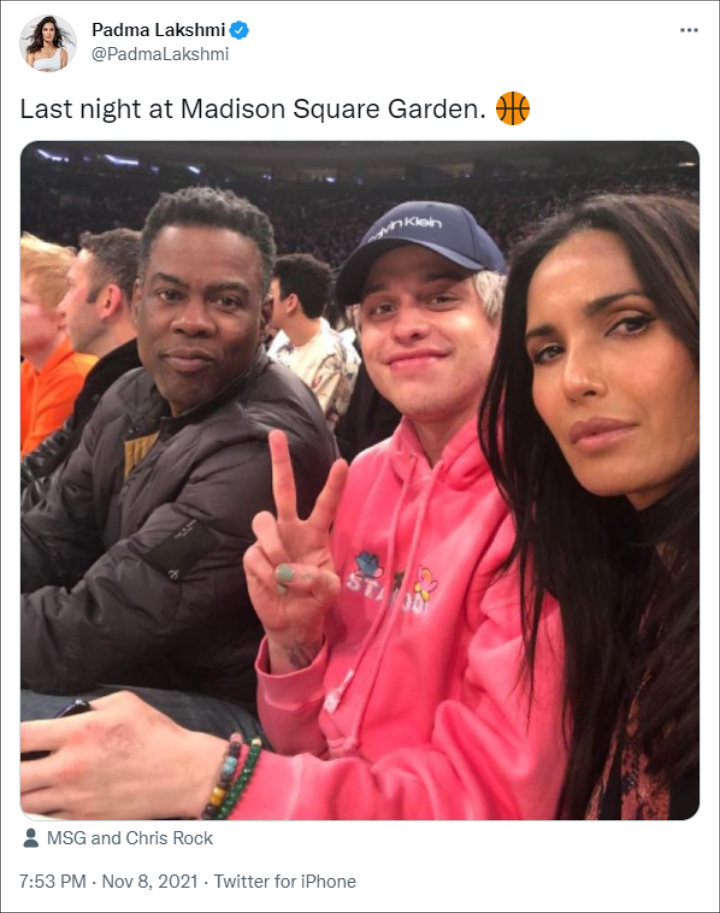 Padma Lakshmi took a picture with Pete Davidson and Chris Rock at a basketball match.

The photo was taken just days after Pete fueled his dating reports with Kim as they reportedly had dinner dates during the reality TV star's stay in New York City last week. "The King of Staten Island" star reportedly arranged a private dinner on the rooftop of Campania's in Staten Island on November 1. The next day, they met up again at Manhattan private members' club Zero Bond, but this time they were joined by friends, including Kim's longtime pal Jonathan Cheban.

Prior to that, the 27-year-old funnyman and the SKIMS founder were spotted holding hands on a rollercoaster ride during a trip to Knott's Scary Farm in Buena Park, California on October 29. The unlikely couple shared a lingering kiss during Kim's hosting debut on "SNL" earlier that month.

As for Padma, she recently confirmed her relationship status following her split from her on-and-off boyfriend Adam Dell. Back in June, she was caught locking lips with famed writer Terrance Hayes, but it seemed that their romance has fizzled out as she said during an appearance on "Watch What Happens Live with Andy Cohen" that she is currently single.