After the 'WAP' hitmaker pitched her plan via social media, the streaming platform's staffers react by posting a string of funny responses to her guest star idea.

AceShowbiz - Cardi B's dream of a cameo role in hit Netflix series "You" may come true, after platform chiefs playfully responded to the star's pleas.

The "WAP" hitmaker was alerted to an old clip featuring Penn Badgley, who plays the show's creepy killer lead, in which the actor raves about the way she engages with her fans on Twitter and Instagram.

"She has such an authentic relationship to (social media) and that's why people like her so much," he raved in the clip, prompting the rapper to post a very excited response on Twitter.

"OOOOMMFFFGGGGGG HE KNOWS ME !!! OMMMGGGG!!!!!! Yoooo like I'm famous famous," Cardi raved on Twitter earlier this week (ends October 22) in response to Penn's sweet shout out, adding a string of screaming face emojis, before pitching her "You" cameo plan to Netflix officials. 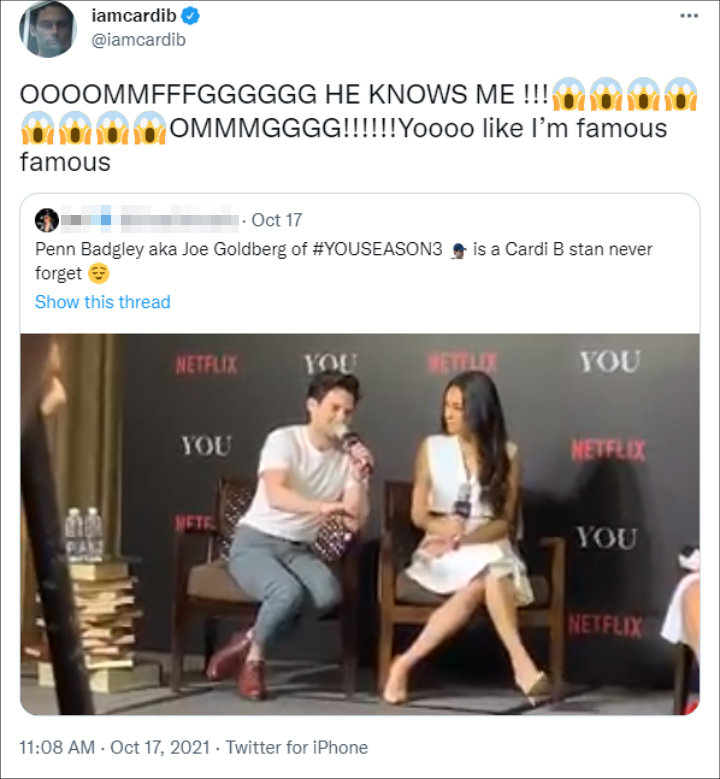 "So it's episode 1 and I'm at Paris Fashion Week shutting it down! I turn around and there stands YOU," she penned, asking show bosses to "finish it off."

The exchange prompted the two new social media pals to swap their Twitter profile pictures and now Netflix social media staffers are playing along too, posting a string of funny responses to Cardi's pitch.

One post reads, "Tie me up like I'm surprised," alongside a photo of Penn with his hands tied behind his back, while another suggests, "Let's role-play, I wear a disguise" next to a shot of Badgley in a chef's hat.

And it seems top staffers at the streaming site are already on board with the idea because they've made a change to their Twitter profile too. It now reads, "Petition to get Cardi B to guest star in Season 4 of You!"

The bosses announced the show has been renewed for a fourth season last week (ends October 15).

Stevie Wonder Eyes American Roots Performance Grammy With 'Where Is Our Love Song?'

Cardi B Freaks Out Over Netflix's 'You' Gift From Joe Goldberg

John Stamos to Return as Dr. Nicky in Season 2 of 'You'