When slamming Hollywood Star Kids' Instagram account for sharing the unauthorized pictures, the former 'Gossip Girl' actress says that the paparazzi 'stalk and harass' her children.

AceShowbiz - Blake Lively is making it clear that she's against social media accounts dedicated to sharing paparazzi photographs of celebrities and their children. The former "Gossip Girl" star called out a fan account for posting "disturbing" photos of her and Ryan Reynolds' kids.

"This is so disturbing," Blake commented on the Hollywood Star Kids Instagram account. "I've personally shared with you that these men stalk and harass my children. And you are still posting. You said you would stop. You personally promised me."

Blake then accused the Instagram account of exploiting her children for likes. "This is not casual appreciation," the "A Simple Favor" actress wrote. She further stressed, "This is YOU also exploiting very young children. Please. Delete. Please. Some parents are OK with this. We. Are. NOT."

Hollywood Star Kids has since deleted the photos, which were also shared on the account's Instagram Story and feed. After the post was wiped off, Blake expressed her gratitude to those showing their support.

Taking to her Instagram Story, Blake wrote, "Thank you to everyone UNFOLLOWING accounts who exploit children." The "Green Lantern" star added, "YOU make ALL the difference. Thank you for your integrity. Thank you." 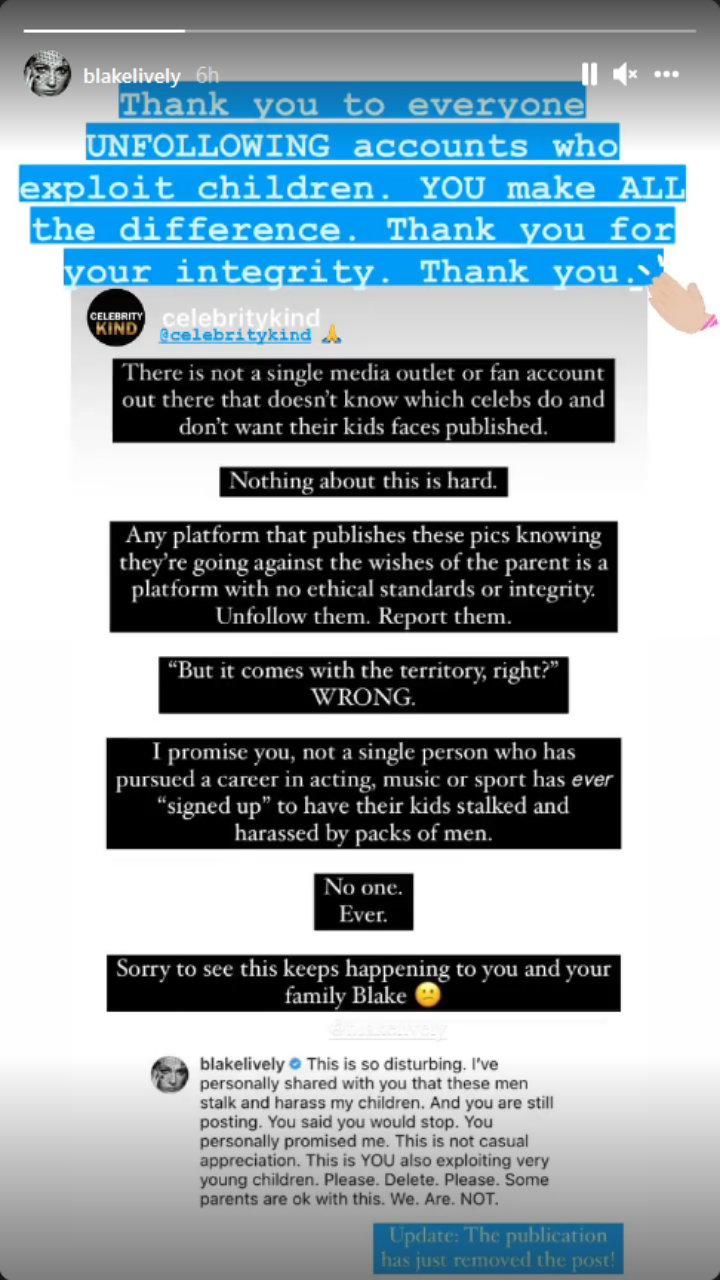 Blake Lively thanked those who unfollowed Hollywood Star Kids' Instagram account, which she accused of exploiting her children.

Blake and Ryan, who tied the knot in 2012, are parents to their three daughters, 6-year-old James, 5-year-old Inez and 2-year-old Betty. Blake herself has been outspoken about their desire to protect their children's privacy.

Back in July, Blake publicly criticized Daily Mail Australia. At the time, she slammed the publication for editing together images of her and her children to make it seem as if she was "happily" waving at paparazzi and fine with being photographed.

"You edit together these images together to look like I'm happily waving. But that is deceitful," Blake made use of her Instagram account to call out the outlet. "The Age of Adaline" star went on to reveal the real story behind the photo, writing, "The real story is: My children were being stalked by a men [sic] all day. Jumping out. And then hiding. A stranger on the street got into words with them because it was so upsetting for her to see."

Blake continued, "Do you do background checks on the photographs you pay to stalk children? Where is your morality here? I would like to know. Or do you simply not care about the safety of children?" She added, "The photographers who would speak to me, I was able to agree to smile and wave and let them take my picture away from my children if they would leave my kids alone. Because it was frightening."

Blake Lively Feels Alienated at Parties for Not Drinking Alcohol