After 'The King of Staten Island' actor impersonates him on 'Saturday Night Live', the 'Bloody Valentine' crooner jokingly criticizes the sketch and insists that he doesn't 'talk like that.'

On Monday, October 11, the 31-year-old took to his Instagram Story to criticize Pete's performance on "SNL". Alongside a video of the sketch, the rapper, whose real name is Colson Baker, wrote, "Pete you know damn well I don't talk like that," adding several laughing emojis.

In a following Story, MGK revealed that he was in on the sketch the whole time, as he FaceTimed Pete while he's still in his costume. The "Loyal" crooner could be seen laughing at the 27-year-old comedian, who wore a head full of white hair, suit and pink butterfly clip. "Twins," the musician captioned the photo. 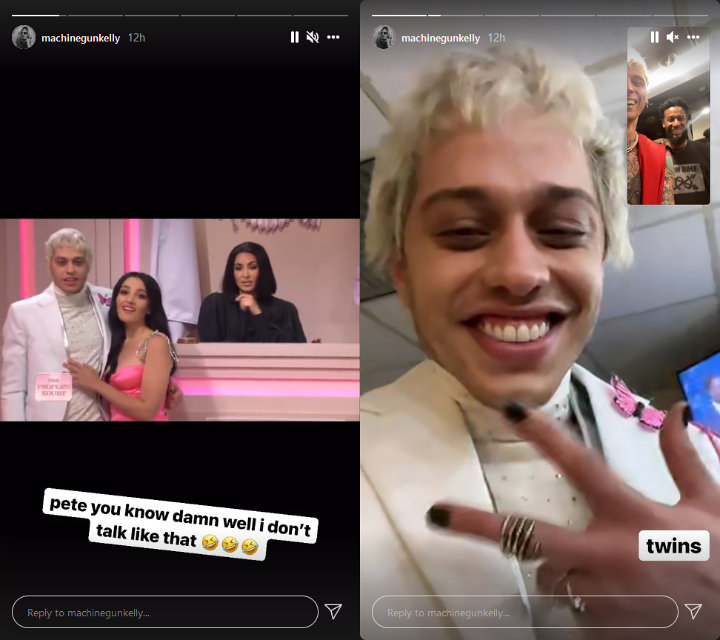 Not stopping there, MGK turned to his Twitter account to hint that he wants revenge after Pete poked fun at his relationship with Megan Fox. "I think it's time for me to come on the show as Pete @nbcsnl," the "Midnight in the Switchgrass" actor joked, tagging the variety show. 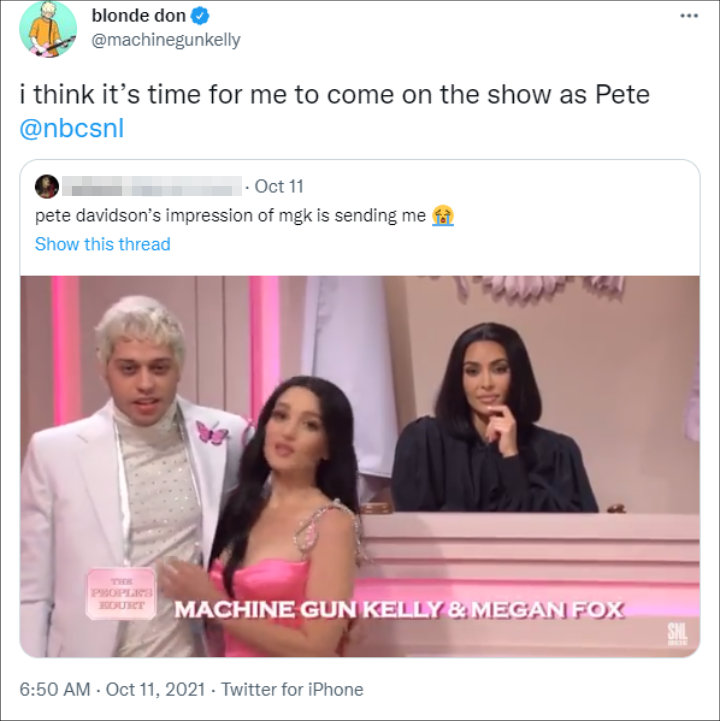 The sketch saw guest host Kim Kardashian hilariously mocking her older sister Kourtney Kardashian and her relationship with Blink-182 drummer Travis Barker in a TV court show parody titled "The People's Kourt". The SKIMS founder, imitating Kourtney's infamously monotone voice, called in her "bailiffs" as Pete and co-star Chloe Fineman appeared as MGK and Megan, dressed in the same outfits that the real-life couple wore to the 2021 iHeartRadio Music Awards.

"Hey, hey what's up?" Pete said. Chloe then asked Kim, who portrayed Kourtney, "Wait, why are we best friends?" In response, Kim jokingly said, "Because our boyfriends have tattoos for necks."

Pete then tried his best to laugh like MGK before he told Chloe, "I wish I could vape you." They then wiggled their tongues together in a cringe-worthy make out session that mirrored MGK and Megan's past PDA.

'The Bachelorette' Recap: Michelle Young Clears Up Rumors About Her Knowing One Guy Before the Show