The actor, who is most known for his role as Stanford Blatch on the HBO show, was last seen on New York City set of the revival show alongside co-star Sarah Jessica Parker.

AceShowbiz - Willie Garson has passed away. It's reported that the Stanford Blatch depicter on "Sex and the City" died after a secret battle with cancer. He passed away at the age of 57 on Tuesday, September 21, just weeks after filming scenes for the show's reboot.

Sources close to the actor told TMZ that he had "been battling cancer" though it is not confirmed that the illness was the cause of his death. A separate informant, in the meantime, claimed to PEOPLE that he passed away following a "short illness." He was last pictured on set of the revival show, "And Just Like That...", production alongside the series' star Sarah Jessica Parker and comedian Mario Cantone in New York City.

Mourning over his death was his son, Nathen Garson. Taking to his Instagram account, Nathen shared a heartbreaking tribute to his father. In it, he called his dad "the toughest and funniest and smartest person."

"I love you so much papa," Nathen wrote alongside a series of photos of Willie. "Rest In Peace and I'm so glad you got to share all your adventures with me and were able to accomplish so much. I'm so proud of you. I will always love you, but I think it's time for you to go on an adventure of your own."

Nathen added, "You'll always be with me. Love you more than you will ever know and I'm glad you can be at peace now." He concluded his post, "I'm glad you shared [your] love with me. I'll never forget it or lose it."

Mario also shared a tribute on his Instagram page. "I couldn't have had a more brilliant TV partner. I'm devastated and just overwhelmed with Sadness," the Anthony Marentino depicter captioned a photo of him and Willie. "Taken away from all of us way soon. You were a gift from the gods sweet Willie. Rest …I love you."

"Sex and the City" star Cynthia Nixon shared an emotional tribute as well. Alongside a throwback photo of herself and Willie, she penned, "So deeply, deeply sad we have lost @Willie.Garson. We all loved him and adored working with him. He was endlessly funny on-screen and in real life."

"He was a source of light, friendship and show business lore. He was a consummate professional -- always," Cynthia continued. "My heart goes out to his son, @Nathen_Garson. Nathen, I hope you know how much he loved you and how proud he was to be your dad." 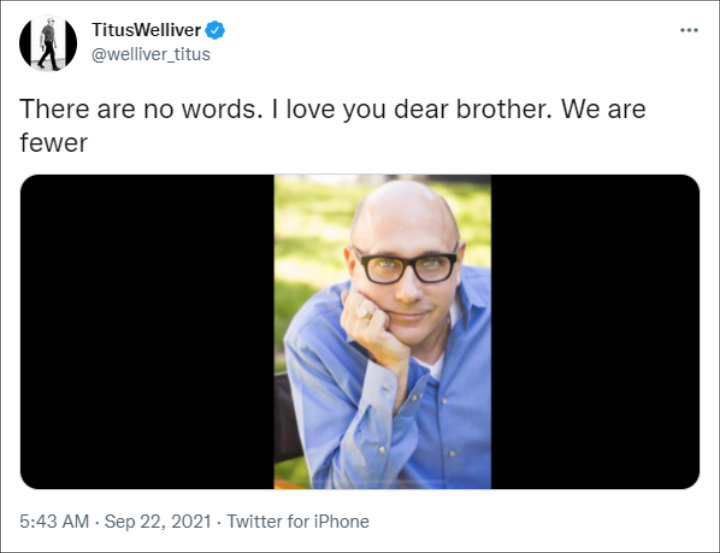 Willie's friend and fellow actor Titus Welliver also turned to Twitter to post a heartfelt tribute, alongside a smiling photo of Garson. "There are no words. I love you dear brother," the "Bosch" star wrote. "We are fewer."

Gabby Petito's Remains Are Confirmed, Her Manner of Death Is Homicide

Willie Garson's Cause of Death Unveiled to Be Pancreatic Cancer