Paris Hilton on Britney Spears' Engagement: 'She Deserves It'

When asked about the matter while attending the 2021 MTV VMAs, the hotel heiress shares her excitement over the exciting news regarding the pop star's engagement to Sam Asghari.

AceShowbiz - Paris Hilton is extremely happy for best friend Britney Spears, who recently announced her engagement to her boyfriend Sam Asghari. When asked about the matter while attending the 2021 MTV VMAs on Sunday, September 12, the hotel heiress shared her excitement over the news.

"That makes me so happy!" Paris, who made a grand entrance in a pastel pink Mini Cooper with Kim Petras, told Entertainment Tonight while gracing the red carpet. "I just wish her all the love and happiness in the world. She deserves it."

Paris also talked about how excited she is to meet Britney. She shared that she planned to tell the pop star "just how happy I am for her and proud I am for her using her voice and standing up for herself, and really just turning her pain into a purpose."

"The Simple Life" alum herself is currently gearing up for her own wedding to fiance Carter Reum, Of the possibility of teaming up with the "Toxic" singer for some mutual wedding planning, Paris shared, "Good idea, yes! I need all the help I can get."

For the award-giving event, the "Cooking with Paris" host turned heads in a bedezzled, spiked mini dress that featured a high neckline and asymmetric skirt. While her dress was extravaggant, the hotel heiress kept it simple for her hair and jewelry. She paired the looked a pair of Aquazzura pumps.

The news of Britney's engagement to Sam was confirmed by the latter's talent manager, Brandon Cohen, on Sunday. "The couple made their long-standing relationship official today and are deeply touched by the support, dedication and love expressed to them," Cohen said.

It was said that Sam popped the question at Britney's home in Los Angeles with a "one-of-a-kind ring" by New York jeweller Roman Malayev. The 4-karat round brilliant stone is enhanced with a floating solitaire design. The ring reportedly has "Lioness", Sam's nickname for his now-fiancee, engraved inside the band.

Paris Hilton Adopting New Cat After Her Dog Is Missing 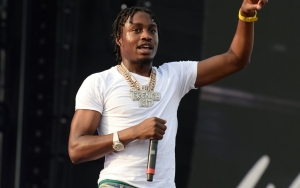