The 'WAP' femcee drops expletives as she shows her online devotees the damages to her property in Atlanta, Georgia following the flood caused by Hurricane Ida.

AceShowbiz - Cardi B's home in Atlanta, Georgia has been partially flooded by the remains of Hurricane Ida.

Taking to her Instagram Story on Wednesday night (01Sep21), the "WAP" rapper shared a video of water leaking into her pad and pooling in a hallway. She also found storm water in her bathroom.

In another Story posted early on Thursday morning, according to Revolt.TV, she wrote, "This storm ain't no hoe."

She and rapper Offset purchased the $5.8 million (£4.2 million) mansion in the Sandy Springs suburb in 2019.

The southern state has been under a "slight risk for severe weather" warning since Hurricane Ida struck Louisiana as a Category 4 storm on Sunday.

While Cardi hasn't yet shared if her relatives further north have been affected by the storm too, as both New York and New Jersey were hit hard on Wednesday and Thursday with record rainfall, flooding and tornadoes.

According to U.S. network NBC, at least 29 people have died to date from the effects of the storm.

"Dukes of Hazzard" star John Schneider also suffered damage to his property in the aftermath of the hurricane.

He posted a picture of his classic cars. One was smashed by a fallen tree while the other was stuck in the branches. 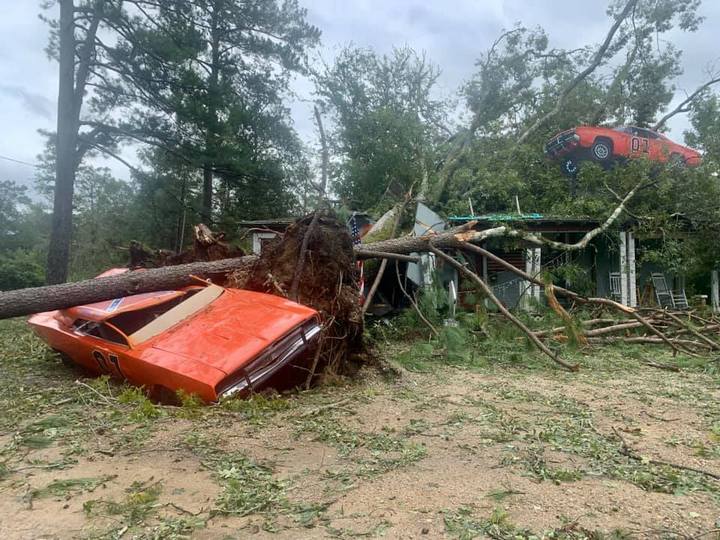 John Schneider's car was smashed by a fallen tree

"Well… When something like this happens you have two choices: Tears and laughter. I choose laughter," he wrote on Facebook, before adding, "So… What's your caption? Here's mine: 'Miss Ida stopped by to see the General at Miss Shirley's last night…' "