Prior to this, Katie appeared to accuse Greg of gaslighting her after they had a fallout in the Monday, August 2 episode of her season of the ABC dating competition show.

AceShowbiz - Former contestant of "The Bachelorette" season 17 Connor Brennan has come into fellow contestant Greg Grippo's defense. Connor defended Greg after the season's leading lady Katie Thurston aluded that Greg gaslighted her ahead of their breakup.

"Relationships are nuanced. Breakups are nuanced," so he wrote on Twitter on Monday, August 2. "sometimes there's not a good guy or a bad guy. sometimes cameras and tweets can't accurately capture the complexity of real life. Kindness is free, love is complicated #TheBacheloretteABC." 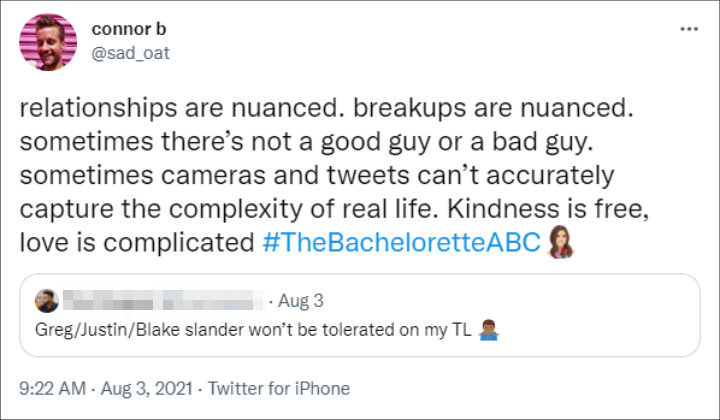 He also responded to a fan's tweet which read, "And sometimes manipulative gaslighting turns into physical abuse and the perpetrator excuses it because his friends defend him. This is an opportunity to still support your friend and acknowledge he crossed a line and encourage him to get help before it escalates."

To the tweet, Connor replied, "There was no gaslighting in this episode, there was a fight between two people that you saw maybe 20 percent of."

However, he then deleted the tweet seemingly following a backlash over his comment. He explained, "quick note: i deleted my tweet reply about gaslighting once i saw that katie herself had posted resources about gaslighting. my intent wasn't to invalidate anyone's experience, but impact is more important than intent, so i'd like to apologize to anyone who was hurt by my words."

Katie and Greg fell out in the Monday, August 2 episode of "The Bachelorette". During the episode, Katie told Greg that she loved looking at him and told his family that he would be receiving a rose that evening. However, it only made Greg upset as he told the former bank manager, "I don't give a f**k about the rose."

"I was just telling you that you filled a hole in my heart," the New Jersey native went on to say, "I've never given up on you. I've fought so hard for you here … As much as it hurts me, I've reached my breaking point with this. I gave you everything. I really hope you find something."