Assuring that he's fine after a TikTok user Chris noticed he has not uploaded any photo of him on his social media page for the past 14 weeks, the 'Knocked Up' star finds the fan's speculation 'funny.'

AceShowbiz - Seth Rogen has had a laugh, thanks to a viral TikTok video that claims he was kidnapped. Taking to his Twitter account to share his response to the fan's speculation, the "Knocked Up" star appeared to be left amused by the clip.

On Tuesday, August 3, the "Neighbors" actor tweeted, "I have not been kidnapped!" Seemingly wanting everyone to know that he's fine and has absolutely not been abducted, the 39-year-old actor enthused, "This is not a kidnapper writing this from Seth's account! I promise!"

Setting the record straight that the kidnap speculation "was not at all true," he went on sharing his reaction to the viral video. "This video is very funny," he remarked. 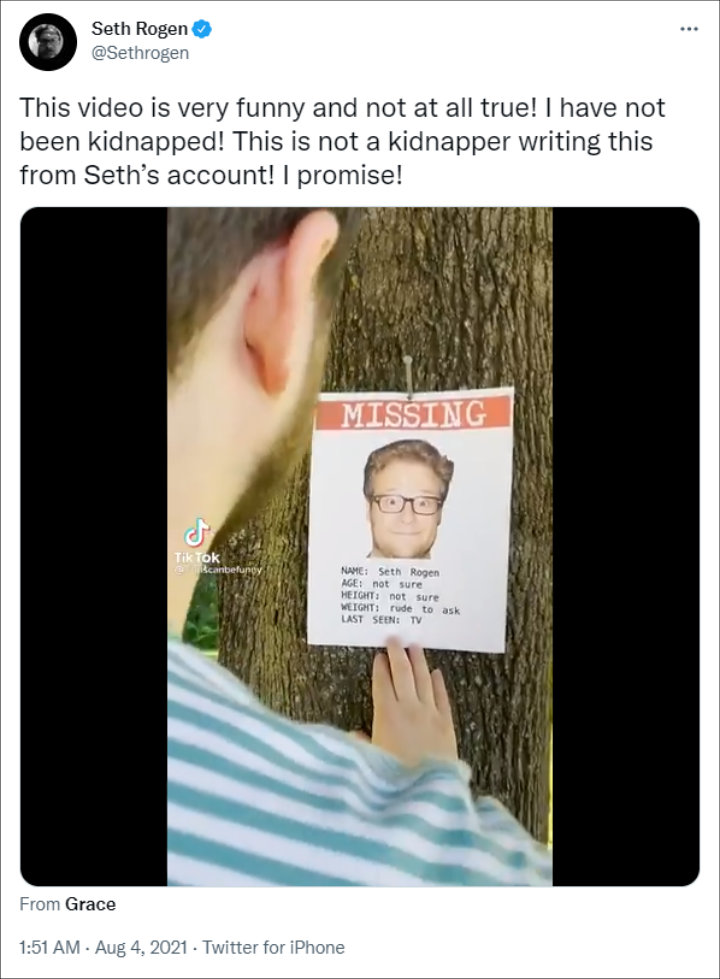 Seth Rogen responded to a viral TikTok video that claimed he was kidnapped.
Editors' Pick

In the video that has gained nearly 170,000 viewers and 30,000 likes, the TikTok user @chriscanbefunny made his own music video after realizing he had seen a lot of photos of Seth's vases, but not the artist himself. "Haven't seen a recent photo of his face, yeah," Chris sang in his own song. "I have a pretty crazy hypothesis that Seth was kidnapped by a shady ceramicist, who has him tied up, completely incapacitated."

Chris also had a friend mimic the fake kidnapping, as well as moments when a supposed kidnapper tweeted from Seth's account. The TikTok star additionally suggested that he had no intention to insult Seth's skills as a ceramicist. He sang, "I'm not saying it's impossible that, in addition to comedy, Seth can make pottery. I'm just saying can we check on Seth?"

"I'm worried that the vases are a cry for help," Chris' song continued, "Is it possible he's trapped in a 'Silence of the Lambs'-esque well?" In his viral clip, Chris admitted it was an "eerily specific" song. Elsewhere in the music video, he insisted, "I'm not that kind of Rogen super-fan," adding that he hasn't even seen some of the actor's recent shows.

Chris' video came as Seth hasn't posted any photo or selfie of himself on his Instagram account for 14 weeks. The majority of the images on his page are those of his pottery and a throwback pic with his dad.