The 'Keeping Up with the Kardashians' alum shares a photo of himself cuddling with his model girlfriend while enjoying the summer vacation with his 9-year-old daughter Penelope.

AceShowbiz - Scott Disick is clearly not shy to show the world how much he is in love with Amelia Hamlin. Enjoying summer with a boat trip in the Hamptons, the "Keeping Up with the Kardashians" alum shared a photo of himself cuddling with his girlfriend on his social media page.

On Saturday, July 24, the former "Flip It Like Disick" star took to his Instagram feeds to post a PDA-filled snap from a boat trip on the open seas with Amelia and his 9-year-old daughter Penelope Disick. In one shot, the 38-year-old reality star could be seen cozying up to his girlfriend while wearing matching gray sweatshirts.

The twosome also covered themselves in a wool Hermes blanket. In the note accompanying the sweet post, Scott penned, "Hermes only to swim." Amelia then responded by leaving a series of red heart and fire emojis in the comment section.

Showing off that she also enjoyed some time on the sea with her beau, Amelia took to her Instagram Story to share the same photo with a caption that read, "I love you!" Scott, in the meantime, posted an adorable snapshot of himself kissing Penelope on the head as they both snuggled under the blanket. The TV personality later shared a pic of his daughter smiling and standing by a railing with a friend. 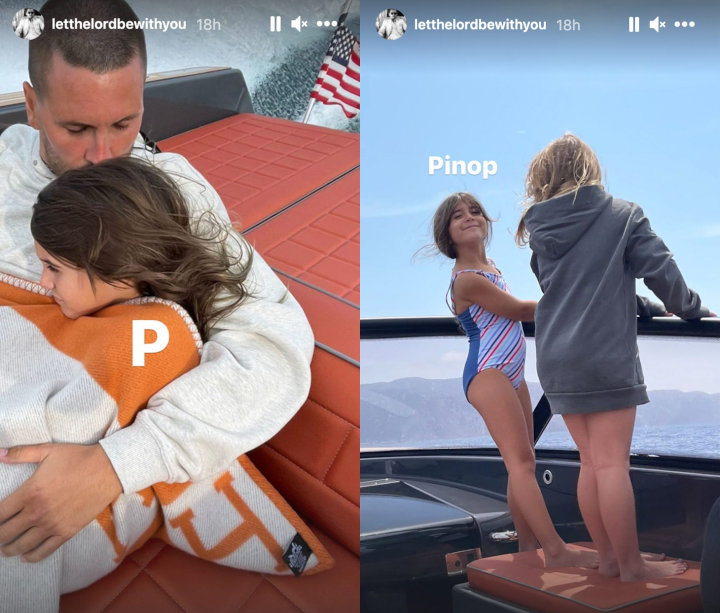 Scott Disick shared photos from his boat trip with girlfriend Amelia Hamlin and his daughter Penelope.

During their boating trip, they passed by a pod of whales. Amelia then documented the moments when the big mammals swam near their boat. Over the video, the daughter of Lisa Rinna wrote, "Today was so amazing."

On Sunday, July 25, Scott himself uploaded a photo of Penelope eating her lunch in the pool. The little girl could be seen wearing a brown swimsuit while holding a bowl of her meal. In the caption, the proud dad wrote, "Little lunch in the pool with pinop."

Scott was first linked to Amelia in October 2020 and they made their relationship Instagram official during Valentine's Day weekend. Recently, the model's dad Harry Hamlin shared his thoughts on his daughter's relationship with Kourtney Kardashian's ex.

During an episode of "The Real Housewives of Beverly Hills", the 69-year-old first confessed, "My feelings about it, I must confess: the issue that's the most enduring is the age difference, which to me is odd." Of the age gap, he compared it to his past romance, "But, then again, every time I think of that, I think of myself and Ursula Andress. I was 14 years younger than she when we had [our son] Dimitri, so I can't really complain, right?"