The former Cleveland Browns wide receiver feels lucky that he is 'still breathing' and only suffers 'a scratch' after his three-wheel motorized bike flips twice.

AceShowbiz - Terrelle Pryor is done with bike after escaping death when he was riding one. The professional football player luckily survived a horrifying bike accident on Thursday morning, July 22.

Making use of Instagram to share his harrowing experience, the 32-year-old posted a photo and videos of his wrecked vehicle on his Stories. In the videos, the three-wheeler can be seen having severe scrapes, scratches and dents, while the windshield was completely crushed.

Despite the damage to the vehicle, Terrelle miraculously only suffered "a minor injury" as he captioned one of his Stories, "Luckily still breathing and a scratch." It's unclear how the accident happened and where it occurred, but the former NFL star revealed, "Flipped twice from this dumb a** car chipping me."

In a message to TMZ Sports, Terrelle went on assuring that he is okay after the accident. "Yea, I'm cool," he confirmed. The unfortunate event, however, is apparently enough to convince him to quit riding a bike as he swore off in the caption of his video, "Done w bikes." 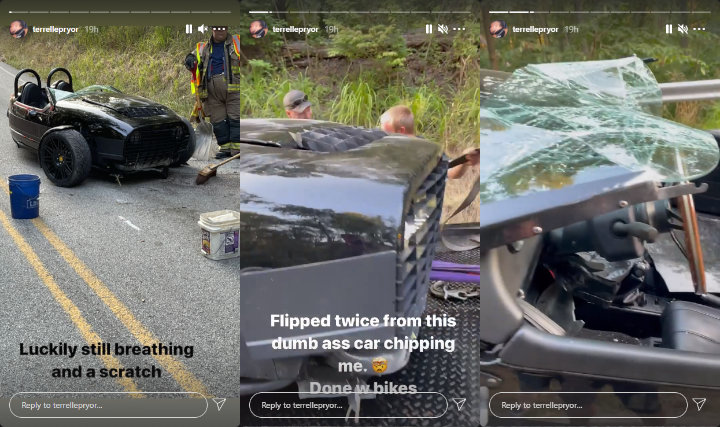 Terrelle Pryor showed his wrecked bike after a terrifying crash.

Terrelle has been seen riding the motorized three-wheeler, a Vanderhall model, for the last few months. His decision to stop riding bike is a complete shift to his previous attitude as he seemed to enjoy cruising in it before, even posting a video of him driving the vehicle with no hands back in May.

This isn't the first time Terrelle survived a harrowing incident. Last November, he was allegedly violently stabbed by his girlfriend. He initially was listed in critical condition but survived the injuries.

Terrelle is currently a free agent after the Jaguars cut him from injured reserve last September. He has been trying to make a football comeback as he revealed to TMZ Sports earlier this month that he had spoken to five teams about a return to the NFL. He has not played an NFL game since 2018.