The 'TROLLZ' rapper pulls his foe's gangsta card after the '3 Headed Goat' spitter and his girlfriend India Royale were caught in a gunfire with intruders at his Georgia home.

AceShowbiz - 6ix9ine a.k.a. Tekashi69 still has no sympathy for Lil Durk despite the latter's latest near-death experience. The New York City native has laughed at his foe after the Chicago-born star and his girlfriend India Royale were caught in a gunfire during home invasion. 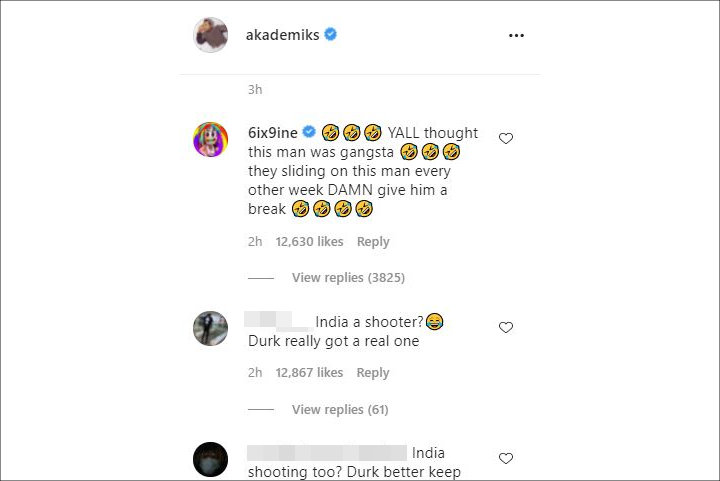 6ix9ine mocked Lil Durk after a shootout during home invasion.

Not stopping there, he took to his own Instagram Story to poke fun at Durk's situation, "SOMEONE SAID @lildurk not gon slide till they kill his girlfriend [crying laughing emojis] YALL CRAZY."

Apparently catching heat for his merciless comments, 6ix9ine later defended himself as posting another Story which read, "Don't get mad at me otf meatriders LOL I'm not the shooter [sideways crying laughing emojis]."

Durk, whose real name is Durk Derrick Banks, and his girlfriend India Royale were the victims of home invasion when some people busted into his home on early Sunday, July 11 a little after 5 A.M. They were in bed when the intruders stormed into his home in the Chateau Elan neighborhood of Braselton, about an hour outside Atlanta.

According to the Georgia Bureau of Investigation, the 28-year-old rapper and his girlfriend pulled out their own guns and exchanged fire with the home invaders. Luckily, no one was injured in the incident as they scared off the assailants, who managed to escape before police arrived on the scene.

It's currently unclear how many people who stormed into the house as officials at the Georgia Bureau of Investigation are now looking into the crime, classified as a home invasion and aggravated assault, and have appealed to members of the public for any information or tips which could help them identify those involved. The rapper hasn't commented on the scary incident.