When expressing remorse over her past 'disrespectful' remark about the late wrestler, the 'Total Bellas' star admits that 'it's not worth hurting someone's feelings for a meaningless laugh.'

AceShowbiz - Nikki Bella proves that she is willing to take full responsibility for her own actions. After her past comments about late Joanie "Chyna" Laurer that she made on "Fashion Police" resurfaced, the "Total Bellas" star penned a public apology note.

Taking to her Twitter account on Monday, June 28, the 37-year-old star wrote, "I want to sincerely apologize for a comment I made over 8 years ago on 'Fashion Police'." She pointed out, "I am sorry and embarrassed by my 29 year old self, who offended Chyna and in turn, hurt her family and others. I wish I could take it back." 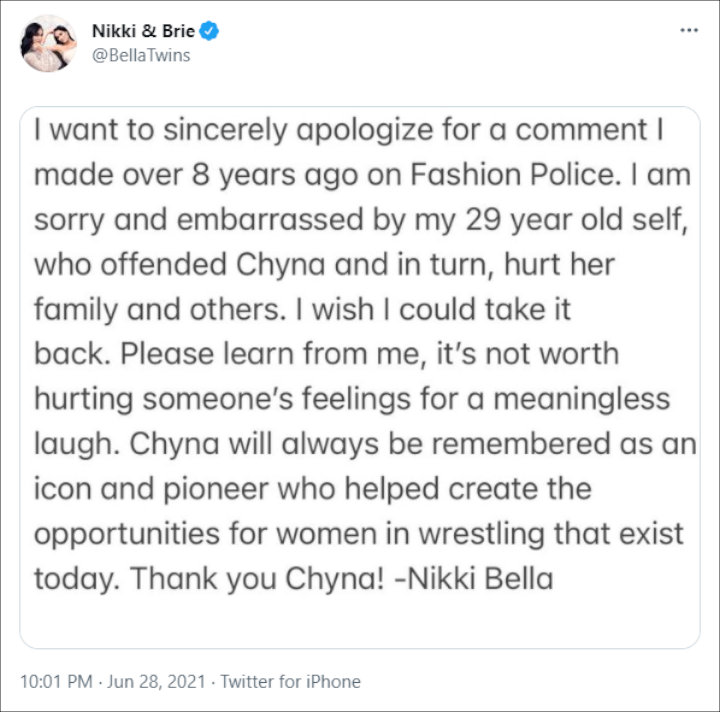 "Please learn from me, it's not worth hurting someone's feelings for a meaningless laugh," Nikki stated, hoping her past negative behavior will be a life lesson to others. The retired professional wrestler then stated, "Chyna will always be remembered as an icon and pioneer who helped create the opportunities for women in wrestling that exist today. Thank you Chyna! - Nikki Bella."

The official Chyna Twitter page, which first called Nikki's past comment "disrespectful," has since responded to the public apology post. "Nikki has apologized on her page and in private. It was sincere," the page declared. "Please stop attacking her. Her apology has been passed on to the family also. She has grown as a person. There is no hate or Ill will. Please build each other up not tear down. Chyna believed in forgiveness." 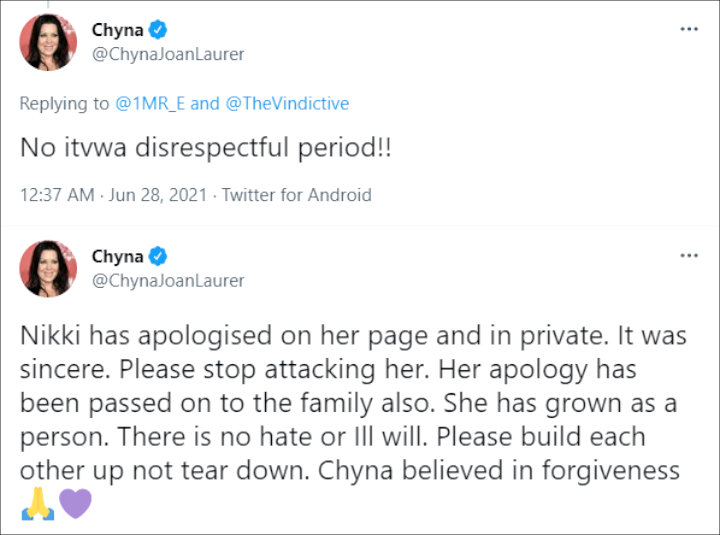 In the resurfacing clip from a 2013 episode of "Fashion Police" with Joan Rivers, Nikki and her twin sister Brie Bella joked about Chyna's "butch" features. "We don't know if it's a man or a woman," Nikki said while holding a photo of the late WWE star, who was dressed in a silver and black wrestling costume. At the time, host Joan, who died at the age of 81 in 2014, chimed in, "I totally agree… Her vagina has a penis."

Chyna died of an overdose in 2016 at the age of 45. The late WWE star was found dead in her apartment in Redondo Beach, C.A. after she had not been seen or heard of for days.