The former reality TV star says that 'it's wild how the universe works' as she raves over her first child's due date which will be the same day she met with her husband Mike Appel two years ago.

AceShowbiz - Ashley Jacobs is going to be a first-time mom. In a new heartwarming social media post, the former "Southern Charm" star revealed that she is "over the moon" with her first pregnancy after secretly marrying her husband Mike Appel.

Having exciting news to share, the 36-year-old took to her Instagram page on Friday, June 11 to post a series of sweet photos with her husband Mike from her babymoon. "We've been keeping the biggest little secret and we are absolutely over the moon share our news!" so she captioned the post along with a ring and baby emojis. She went on to spill, "Baby boy coming in August [love]."

"Huge thank you to the @koakearesort for making our honeymoon/babymoon a dream come true! The Ko'a Kea will always be where we come back to celebrate," Ashley continued in the caption, pointing out that she is currently on honeymoon and babymoon.

In her Instagram Stories, Ashley offered a glimpse of her vacation. The former reality star posted a clip showing dolphins jumping in the sea. In the following Story, she was seen all smiles with her husband. She also could be seen stroking her growing pregnant belly. For the outing, she donned a floral-patterned yellow bikini and a heart-shaped white-framed sunglasses, while her husband went shirtless. 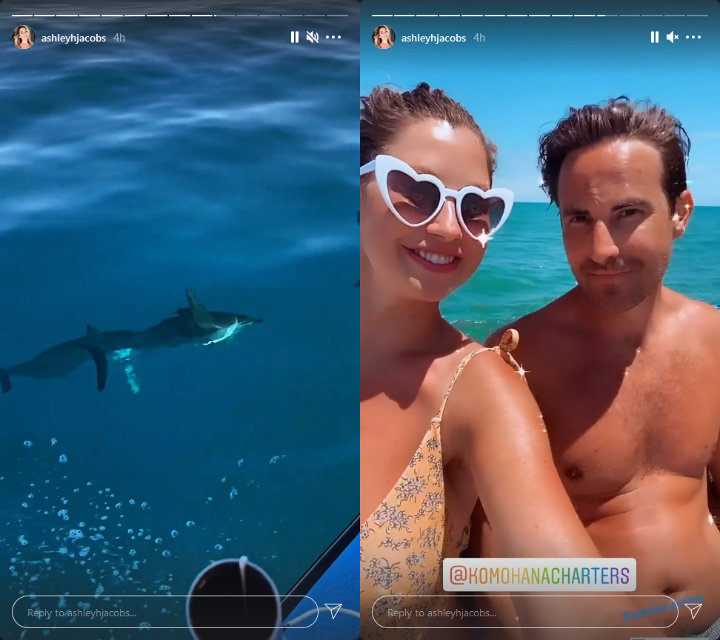 Ashley Jacobs on a honeymoon/babymoon in Ko'a Kea.

In a separate snap, Ashley and the soon-to-be father were kissing sweetly in the clear blue sea of Na Pali Coast State Park. Over the image, the TV personality wrote a caption that read, "Babymoonin' Honeymoonin' in Paradise!" The star also showed off her ring in the following Story. She then included a sticker GIF that read "Mr. & Mrs." 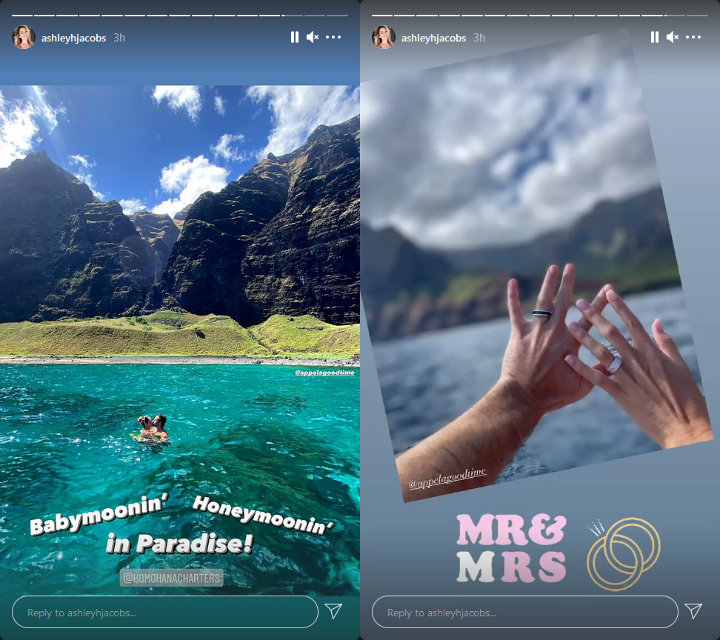 Ashley and Mike also confirmed to PEOPLE they are expecting their first child, saying, "We're having a baby!" Raving over her pregnancy, the soon-to-be mama said, "It's wild how the universe works - our first child together is due the same day we met, two years ago!" She added, "We are over the moon to be on this adventure together, as newlyweds."

Ashley got engaged to Mike in March, almost two years after they met in a summer rooftop party in her hometown of Santa Barbara, California. At the time, she opened up to PEOPLE that she said "yes" after her husband proposed to her while they were out on a snowmobile ride in Park City, Utah. She also told the publication, "After a year and half of dating, we can both agree that this adventure we're on together is just getting started... We're a great team and we can't wait for what's ahead! Buckle up!"