The British TV personality attacks the world's number-two female tennis player who decided to withdraw from French Open after being fined for refusing to do press conference due to mental health issue.

AceShowbiz - Piers Morgan apparently has so much to say regarding the scandal surrounding Naomi Osaka. Taking to his Twitter account on Monday, May 31, the British TV personality viciously attacked the tennis star who decided to withdraw from French Open after being fined for refusing to do press conference.

In one of his tweets, Piers, who previously landed in hot water for branding Meghan Markle liar over her suicide claims, used the Duchess of Sussex in blasting Naomi. "*NEW COLUMN* Narcissistic Naomi's cynical exploitation of mental health to silence the media is right from the Meghan & Harry playbook of wanting their press cake and eating it," so he tweeted.

After getting backlash from social media users, Piers continued, "Woke Twitter is now so insane that if I said my next column was about why I like porridge, I would immediately be branded an obsessive, sexist, racist, transphobic b*stard who must immediately be cancelled, if not executed."

When someone tried to tell him that he should be attacking "the people who fined" Naomi instead of the athlete, Piers argued, "She attacked the media for doing their job. As [Rafael Nadal] etc said this week, without media support, tennis would not be the big sport it is & the players wouldn't be rich famous stars."

The former "Good Morning Britain" co-host also insisted in another tweet that Naomi, who currently ranks No. 2 in the world, was withdrawn from the competition "because of the backlash to her attack on the tennis media for doing their job."

A person later told Piers, "You are disgusting! Just a bully, what a horrible man. You should never be able to work in TV again but you will as that's how things work now it's not about talent it's about being controversial! Great Journalism is very rare now. Shame on anyone who gives you a platform." In response to that, Piers sarcastically replied, "This criticism is damaging to my mental health. Delete." 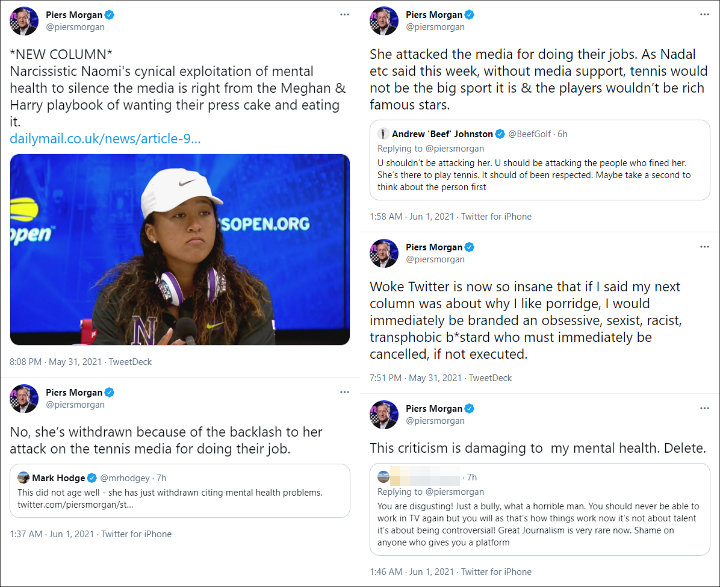 Naomi announced her decision to pull out from French Open in an Instagram post on Sunday. "Hey everyone, this isn't a situation I ever imagined or intended when I posted a few days ago. I think now the best thing for the tournament, the other players and my well-being is that I withdraw so that everyone can get back to focusing on the tennis going on in Paris," the 23-year-old tennis ace wrote in a statement.

"I never wanted to be a distraction and I accept that my timing was not ideal and my message could have been clearer. More importantly I would never trivialize mental health or use the term lightly. The truth is that I have suffered long bouts of depression since the US Open in 2018 and I have had a really hard time coping with that," she continued.

Naomi had to pay $15,000 for being a no-show due to concerns about her mental health. at a press conference after she won over 63rd-ranked Patricia Maria Tig on the first day of this year's French Open. In a statement, the Rolland-Garros teams noted that Naomi "chose not to honour her contractual media obligations. The Roland-Garros referee has therefore issued her a $15,000 fine, in keeping with article III H. of the Code of Conduct." In response to the fine, Naomi tweeted, "anger is a lack of understanding. change makes people uncomfortable."